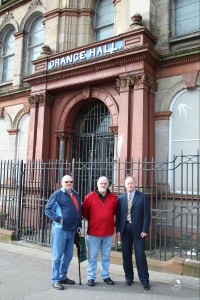 Just after 10 pm a petrol bomb was thrown at the front of the hall causing minor damage.

Inspector Roy Watton said, “This is being investigated as a sectarian hate crime.

“I appeal to anyone who may have been in the area and witnessed the incident around 10 pm to contact police on the non -emergency number 101.

“Alternatively information may be passed on anonymously via the Crimestoppers number 0800 555 111.”