ONE DEAD AS NORTHERN IRELAND COACH CRASHES IN BELGIUM 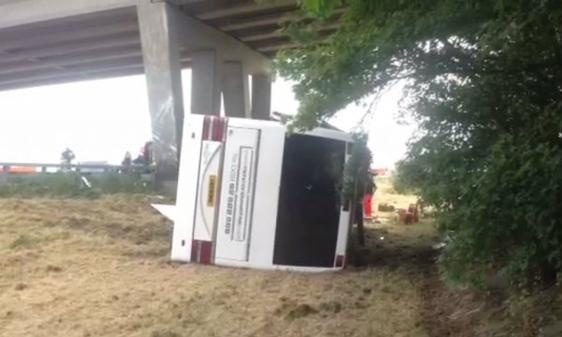 The overturned Richmond coach which crashed into a motorway bridge pillar

ONE person has been killed and others left injured after a Northern Ireland owned coach carrying 34 children a number of teachers from the UK crashed in Belgium.

It is understood that three pupils and two teachers from an Essex school are in hospital being treated for their injuries.

One child is intensive car being treated for a head injury.

The person who died is the coach driver, said the local mayor.

The other driver is said to be seriously ill.

Reports said the bus, owned by Lisburn company Richmond Coaches, overturned on the A18 (E40) at Middelkerke, West Flanders at 9.45 am this morning.

West Flanders traffic police confirmed that one person is dead.

Thirty-one children and three teachers walked away from the crash.

The road is closed and emergency services are at the scene.

A spokesman from Richmond Coaches of Ballinderry Road, Lisburn, confirmed that one of its vehicles had been involved in the crash.

He said what had happened was “a tragedy” and the company was co-operating with the authorities.

He said the company’s thoughts were with everyone involved and they were cooperating fully with the authorities.