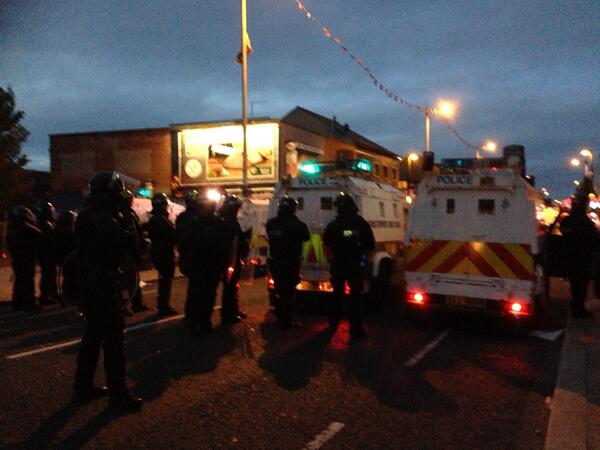 AN investigation by the Police Ombudsman has found that police failed to protect members of the Orange Order who were attacked as they marched through the Short Strand area of Belfast during a Twelfth of July parade.

Senior members of Ballymacarrett District LOL No. 6 complained to the Police Ombudsman after their parade was attacked on the evening of 12 July 2013 as they marched homewards along the Newtownards Road area of East Belfast.

The Lodge complained that police failed to protect its members who came under a sustained and pre-planned attack and said they wanted police to make a formal apology for this failure.

In particular, members alleged that a police driver deliberately stopped his Land Rover, which had the effect of blocking the road, which in turn brought the parade to a halt and thereby facilitated the attack.

Lodge members also alleged that police officers stood by and did nothing as they came under attack from people who were in the grounds of Saint Matthew’s Church.

Police Ombudsman investigators spoke to members of the Lodge and to police officers. They also examined police documentation, radio transmissions and CCTV footage of the incident.

Police Ombudsman, Dr Michael Maguire, concluded that police had failed to protect those taking part on the parade.

“Overall there is no dispute that the parade did come under attack from the Short Strand,” said Dr Maguire.

“While I have found no evidence to suggest any individual officer was guilty of misconduct, it is clear that, for a number of reasons, police had not prepared for such an eventuality.

“My investigators have spoken to senior police officers who acknowledged some of the concerns raised and accept there are a number of lessons to be learned for the policing of future parades in the area.

“Members of the Lodge have said they wanted a formal apology from the police.  I have forwarded a report of my findings and this request to the PSNI,” he said

However Police Ombudsman investigators did not uphold all the allegations made by the Lodge.

They established that the police officer who stopped his Land Rover did so for two minutes.

“The CCTV footage shows the driver had no option but to stop, due to the crowds of people who had emerged onto the road to greet the ‘return’ parade and had gathered directly in front of the vehicle.

“Despite instructions from his senior officer to move as quickly as possible, the officer had to drive very slowly due to the crowd in front of him, some of whom were children.

“The fact the Land Rover had stopped did allow an opportunity for missiles to be thrown, but we found no evidence this was a deliberate tactic,” said Dr Maguire.

CCTV footage showed missiles being thrown from the Church grounds and being thrown back by members of the crowd on the Lower Newtownards Road.

Police Ombudsman investigators established that police had decided not to position officers within the grounds of Saint Matthew’s or within the Short Strand area:

“Documentation shows police felt that to place officers within what was regarded as sacred ground may have created unwelcome community perceptions.

“They based their decision not to have officers in the wider area on the experiences of previous years and on agreements within each of the local communities.

“When trouble broke out the officers then tried to get into the Church grounds, but the gates were locked. The police too were coming under attack and were trying to deploy resources to the area.

“Having examined all the evidence I would not agree that police officers stood by and did nothing to protect the marchers,” said Dr Maguire.