SEAN BRADY TO BE QUIZZED AT HISTORICAL ABUSE INQUIRY 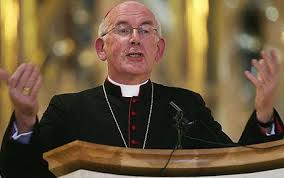 THE former Catholic Primate of All Ireland, Sean Brady, is due before the Historical Institutional Abuse Inquiry in Northern Ireland today.

The former Cardinal was part of a panel of three which inquired into Smyth’s abuse of a young boy in the 1970s in the Republic.

The inquiry, which is sitting in Banbridge Courthouse, is examining whether systemic failings enabled paedophile priest Brendan Smyth to continue his offending for so long.

Yesterday, it emerged that gardaí were aware of the activities of Smyth as far back as the early 1970s.

Confidential documents revealed at the inquiry show that Smyth asked to be admitted for treatment at St Patrick’s Psychiatric Hospital in Dublin after he came to the attention of gardaí in 1973.

The documents also reveal that Smyth had been diagnosed as a paedophile in 1973.

Smyth, originally from west Belfast but who was based at Kilnacrott Abbey in Co Cavan, was convicted of sexually assaulting more than 40 children in Northern Ireland in 1994.

But he told a treating doctor that the true number of victims could have run into the hundreds.