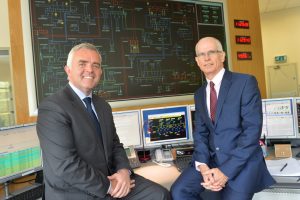 THE Minister of Enterprise, Trade and Investment, Jonathan Bell officially opened the new offices of SONI, the System Operator for Northern Ireland at Castlereagh House, Belfast.

SONI has been playing a central role in ensuring a safe and secure power system and in May 2014, assumed responsibilities for the design and planning of the grid that was previously under the remit of Northern Ireland Electricity (NIE).

Officially opening the new building, Jonathan Bell said: “Electricity plays such a significant role in all of our lives, but it’s something that we have come to take for granted.

The System Operators help ensure the continuous delivery of electricity to meet our needs and expectations across the Single Market.

These premises also tell a story of ongoing investment in Northern Ireland and its key energy infrastructure. That’s important to me as I make the case for Northern Ireland being open for business.”