GRAN FONDO, THEN BIKE FOR A BIRRA 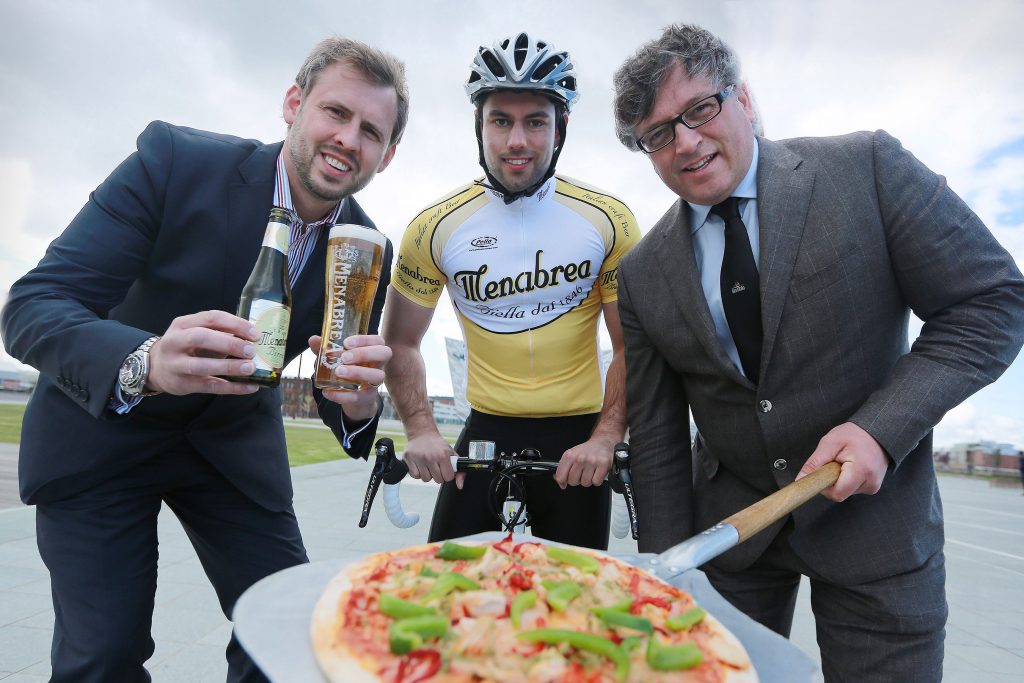 Pictured getting into training for a taste of Italian sport and sociability is cyclist Reuben Hasson from Kilrea, supported by (left) Brian Beattie, Marketing Director for Tennent’s NI, and Darach McQuaid, Event Director for the Gran Fondo.

CYCLISTS participating in the Gran Fondo Giro d’Italia Northern Ireland will have an authentic taste of Italy to reward them for crossing the finishing line on June 21.

The celebrated premium Italian birra, Menabrea, is being brought to Northern Ireland by Tennent’s NI, launching just in time to take on the role of official beer sponsor for the post-ride Gourmet Pasta Party at Belfast Titanic Slipways.

The ride which is a major legacy event arising from last year’s hugely successful Giro d’Italia Big Start offers cyclists a choice of tackling either the 58 or 177 kilometres route.   Even the shorter route promises some tough going so, across the country, cyclists are already saddling up and donning their lycra in preparation for the big day on June 21.

The big cycle will be rounded off with a big afternoon with participants invited to rest their weary limbs and re-live the excitement of the ride over an Italian feast and an ice-cold Menabrea.

It’s a Mediterranean-style match made in heaven, according to Brian Beattie, Marketing Director for Tennent’s NI.  He is delighted to introduce Menabrea to the Northern Ireland marketplace by partnering with an event which shares the product’s longstanding reputation for sociability and notable Italian heritage.

He says, “Menabrea is all about appreciating life to the full, so it’s the perfect partner for the Gran Fondo Giro d’Italia Northern Ireland’s post-ride party.  The ride will be nothing short of amazing, reflecting the famous Italian zest for life, and giving cyclists with a range of abilities an opportunity to see our beautiful natural landscape from the saddle.  Participants will be riding alongside some great names in the world of cycling and enjoying the craic with local cyclists who simply want to be part of this great occasion.  By the time they get back to Belfast they’ll be more than ready to finish off the day with Menabrea and pasta!

“It has been a real business coup for us to secure this superb, award winning premium lager for the expanding Tennent’s NI world beers portfolio.  Menabrea has, famously, been made by the same family since 1846 in Italy’s oldest brewery, located deep in an underground cave system in the foothills of the Italian Alps.  Menabrea is aged for a month in those cool darkened caves, two storeys underground in a unique maturation process, known as ‘lagering’. This ensures the birra acquires its signature taste – complex, malty and hoppy with citrus undertones.”

The Gran Fondo’s Event Director Darach McQuaid, said, “We’re delighted to be saying ‘Ciao’ to Menabrea, welcoming the brand on board as official beer sponsor of the Gran Fondo Giro d’Italia Northern Ireland.  We know that, by the end of the event, many of our participants will have worked up a thirst as well as an appetite and they’ll be looking forward to the social end-of-cycle celebrations with some great-tasting Italian food and beer.  The prospect of the post-ride Gourmet Pasta Party will, I am sure, put some extra power in the pedalling!”