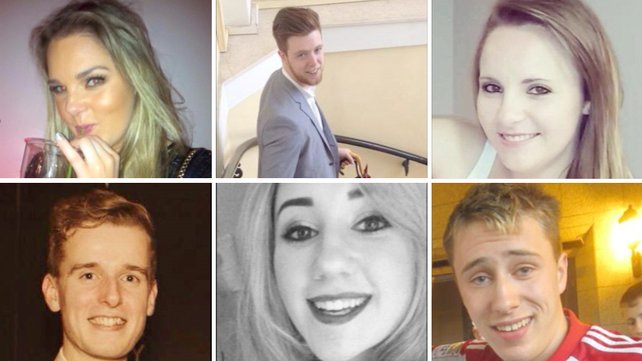 GRIEVING family members of the five young Irish students and one young Irish-American killed when a balcony collapsed in Berkeley in California have started to arrive in the city.

The six died when a balcony at an apartment block collapsed during a 21st birthday party in the early hours of yesterday morning.

One line of inquiry for building control investigators that a water tank leak and dry rot weakened the beams supporting the 13 people standing on the balcony.

The dead have been named as Ashley Donohoe, 22, from Rohnert Park, California; Olivia Burke, 21; Eimear Walsh, 21; Eoghan Culligan, 21; Niccolai Schuster, 21; and Lorcan Miller, 21; all with addresses in Ireland.

Ms Donohoe had dual Irish-US nationality and was a cousin of Ms Burke.

Two other students, including the birthday girl, are said to be in a critical condition in hospital.

Five others are described as stable, but some have life-changing injuries.

The tragedy has left Irish communities around the world stunned, shocked and saddened at the taking of such lives.

Catholic Primate of All Ireland Bishop Eamon Martin has offered his prayers for the dead, their families and those injured in hospital.

Bishop Martin said: “Like many others, I am shocked and deeply saddened to hear the reports of the tragic deaths of five Irish students earlier today in Berkeley, California.

“This devastating news will be felt by Irish people everywhere, and particularly by those who have family and friends abroad.

“I pray that the eight injured students will fully recover from this terrible accident.

“The death of a child or young person is the worst news that a parent can receive.

“At this profoundly painful time I pray for those who have died, and ask also for prayerful support for their grieving families, fellow students and loved ones,” added Bishop Martin.

Police received noise complaints about the apartment less than an hour before the balcony collapsed.

They did not respond immediately because of a reported shooting elsewhere in the city.

Authorities said they were investigating a number of factors, including the structural integrity of the balcony.

Thirteen people were reported to be on the small balcony when it gave way, plunging 12 meters to the street below, officials said.

The balcony was slightly wider than the double-doors leading out to it and no more than 1.5 meters deep.

It had been rated to safely carry a maximum weight of 293kg per square meter, a city spokesman said.

The spokesman said there was no requirement for the building owners to post a limit for the number of people it could hold.

Police said no one on the ground was hurt and no one was on the third-floor balcony at the time of the incident.

Following the collapse, authorities declared all similar balconies in the complex off-limits as a precaution.

The collapsed balcony was removed yesterday, while structural engineers inspected the balcony beneath it, and based on the condition of the wooden supports there made the decision to make arrangements to remove that too.

Questions have arisen about the use of wooden beams to secure the balcony and the preliminary results of an investigation into what happened is due within days.

City spokesman Matthai Chakko said construction of the building was completed in 2007, with a final inspection conducted in January of that year.

The Mayor of Berkeley and the Consul General of Ireland to San Francisco laid two wreaths at the scene late yesterday – one on behalf of the Irish Government, the other on behalf of the local Irish-American community.

He said the city’s Health Department would be offering assistance to people affected.

Counselling would be available and other supports, such as finding people places to stay, he said.

Asked about the response of the emergency services, Mayor Bates said, as he understood it, a call of complaint of violations of the city’s noise ordnance came into the police department and almost simultaneously another call came in, which was a shooting incident in another part of town.

Police responded to the shooting, he said.

About 40 minutes later a call came in, in relation to the balcony collapse.

Mayor Bates said city inspectors would thoroughly investigate the cause of what happened, saying it was really speculation at this point.

“Some preliminary issues that have raised – that possibly some water might have gotten lodged in with the wood – and the wood would have deteriorated over time – but we don’t know that.

“That’s speculation on our part,” he said.

However, he said they will know more shortly as inspectors had been on the case since the incident was reported.