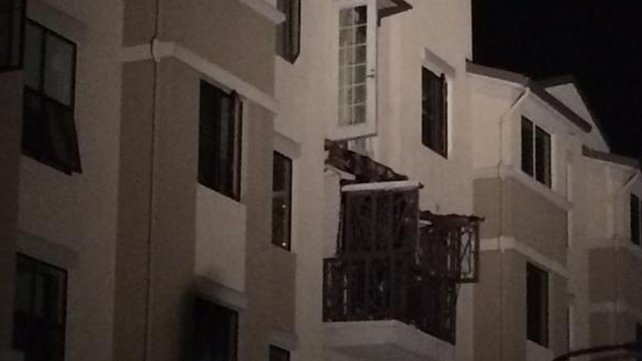 The scene of the tragedy in Berkeley, California where six people have now died after a balcony collapsed

POLICE in northern California have now confirmed that a sixth person has died following a balcony collapsed at an apartment block.

Earlier, the Department of Foreign affairs said that five people who died in a balcony collapse at an apartment block in northern California were Irish.

Four people died at the scene in Berkeley.

A fifth student was pronounced dead in hospital.

The sixth person has also died in hospital despite the valiant efforts of doctors, say local police chiefs.

Eight other Irish people have been taken to hospitals in the area.

It is understood they were attending in 21st birthday party when disaster struck.

Minister for Foreign Affairs Charlie Flanagan said his department is awaiting confirmation of identities, but said some families had already been notified.

The area is a popular destination for J1 students and there are reports that there was an Irish 21st birthday party taking place in the apartment at the time.

It is believed the balcony, which was on the fourth floor, collapsed first on to the balcony below and then onto the path.

Berkeley Police Department spokeswoman Jennifer Coats said police were working with the fire department and city officials to work out what caused the collapse.

Mr Flanagan said he had opened the department’s Consular Crisis Centre and activated its emergency response line so it could provide assistance and guidance to the families of those affected and to others who had concerns.

He added that the Irish Consul General in San Francisco was in close contact with the authorities and would also be providing assistance.

NBC Bay Area reporter Stephanie Chuang said from one of the hospitals: “I have spoken with friends who are in the ER room – they are very emotional, very distraught.. they said they are here for the summer from Ireland.

“They were hanging out with their friends last night when they heard a loud commotion and they saw many of their friends injured and so what they did they jumped into a taxi – they started going to all of the local area hospitals trying to get a status update on their friends.

“What we know from Berkeley Police is that the eight people injured sustained critical life threatening injuries.

“Authorities are investigating why the balcony collapsed – We hear there was a lot of people on the balcony at one point.

“I don’t know if that is one contributing factor.

“Five of their friends died in this accident this morning.”