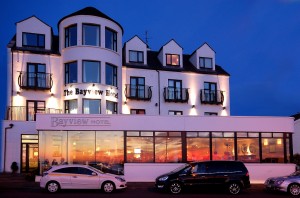 FAMILIES love to get away and many choose to go abroad, but for Law Student Karen, a week away was just too much as she has important exams coming up.

She did however book a fab weekend to the North Coast to let her children experience the fun she had as a child. With a little detective work on the Internet Karen grabbed herself a bargain weekend at the Bayview Hotel Portballintrae.
The Bayview sits proudly in one of Ireland’s most stunning settings, overlooking the ever changing Atlantic Ocean in the picturesque harbour village of Portballintrae, on the famous North Antrim Coast Road.

Here an avalanche of culture awaits you on one of Irelands most famous coastlines, which offers the mythical Giant’s Causeway, Old Bushmills Distillery & Dunluce Castle to name but a few.

Karen and her Children, Sydney and Seth, arrived at the Bayview Hotel just before dusk and were shown up to their superior family room. Karen explained, “ Our room was simply fantastic, lots of room for the children and me, and the place was spotlessly clean and we had a bed each!”

If you are looking for a quality north coast experience then the Bayview is close enough to the excitement but far enough away for a really quiets nights sleep.

After checking in and unpacking it was off to the premier entertainment centre in Portrush.

If you’re looking for Fun and entertainment for you, your friends and your family, then why go anywhere else? Whatever you have in mind, you can be sure of having a great time at the Jet Centre – even if none of you can agree on what to do!

Movie House Cinema, Ally Cats Children’s Play area. Superstrikes, Arcade, Jet Centre and of course Mini golf, with entry prices from £3-00 there is bound to be something to suit all ages and pockets. One thing I am delighted to see is the Jet Centres dedication to children with Autism. Special autism friendly film showings are available just visit www.thejetcentre.co.uk for more details. So if you want to have some fun on the North Coast then the Jet centre is the place for all your entertainment needs. After exhausting the children Karen and the kids returned to the Bayview for a bite to eat and then bed.

Great Food in the Porthole!

e Porthole has the reputation of being the heart of Portballintrae and is a popular meeting place for both locals and tourists alike.

With sumptuous cuisine, an excellent weekend entertainment schedule, well stocked bar and wines from all over the globe, the Porthole is the perfect place to sample good old Northern Ireland hospitality in a venue renowned for its relaxed ambiance.

After a great nights sleep and a wonderful breakfast of locally sourced produce, which is a great start to any day, our three intrepid explorers were off the Giants Causeway

in the footsteps of giants…

OFF TO EXPLORE THE NORTH COAST

Flanked by the wild North Atlantic Ocean and a landscape of dramatic cliffs, for centuries the Giant’s Causeway has inspired artists, stirred scientific debate and captured the imagination of all who see it. These wonders of the world are truly spectacular and these amazing basalt columns are not to be missed.

Try a knowledgeable tour guide, or pick up an audio guide and go at your own pace amongst one of the worlds great wonders. Climb the Shepherd’s Steps and hike along the cliff-top trail to get a bird’s eye view of the beautiful causeway coast.

In the new exhibition area you can unlock the mystery and stories of the landscape in the exhibition area of the causeways award-winning visitor centre, which also boasts a café serving a seasonal menu, and retail zone where you can pick up locally sourced souvenirs and handicrafts.www.nationaltrust.org.uk/giants-causeway

IT HAS TO BE BARRY’S

After a morning of history and geology, the kids were full of knowledge, and as all mums know if the kids are happy then you will be too, so it was off to the reason Portrush exists. Barry’s Amusements

No one is really sure why the five Chipperfield sisters and one brother brought their unique blend of plays and musical show to Ireland. But back in the 1920’s it was certainly a brave and radical step. They were also at the forefront of technology bringing with them one of the earliest movie projectors.

As they toured local towns they built a reputation for themselves and such was the esteem in which they were held that, when the Royal Italian Circus came to tour Ireland in 1923, they asked Evelyn Chipperfield, the eldest of the sisters, if she would act as their agent.

This was how Evelyn met Francesco Trufelli. He was the director of the circus and a former high trapeze artist. The two fell in love. Evelyn was already in love with Ireland and it was not too difficult to persuade her sweetheart to stay.

Together they continued to tour Ireland, in 1926, they were then invited by the Railway Company to set up a permanent site in Portrush. That was the beginning of the most iconic amusement park in Ireland. And they remain true to their motto “fun for all the family”. Barry’s has thrilled thousands of children for many many years and they are as popular today as they ever have been and no one can go to the “port” without a visit to Barry’s. With just too many rides to mention it’s a must visit destination for young and old alike.

Needless to say after a full day out, and with all the thrills they’d had. It was time for dinner and bed.

Back to the Bayview all three were ready to “eat for Norn Irelan” and the Porthole did not disappoint. Sumptuous dinner was a speciality of the Porthole, locally sourced fish and chucky chips, Mum even managed to squeeze in a wee glass of wine before bed, with free WI-FI internet connection in the Bayview the kids devices were well connected too.

All in all our intrepid travellers had a fantastic weekend in Portballintrae and Portrush and it can be the type of holiday where you can do as little or as much as you want to do.

One thing above all, it’s a local holiday, helping local economies.

So the next time you want a weekend away don’t forget our wee part of the world and consider the North Coast.