Pictured unveiling plans for the latest addition to the Beannchor group’s portfolio are Conall Wolsey, managing director and James Sinton, finance director, Beannchor. Belfast’s newest hotel will open in early 2016, situated in Lagan House, formerly occupied by the Department of Justice, which wraps round Victoria Street and Ann Street in the heart of the city centre. Picture by Kelvin Boyes, Press Eye.

The new 55-bedroom hotel will wrap around Victoria St and Ann St, occupying Lagan House – a building formerly occupied by the Department of Justice. Subject to planning approval the hotel is expected to open in early 2016.

Located in the heart of the city centre, in close proximity to Victoria Square and the Cathedral Quarter, the ungraded hotel will epitomise urban chic with stylish, contemporary surroundings, alongside affordable room rates.

In addition to its sizeable accommodation offering, the complex will include a public work space with desktop computer access for residents and non-residents, high speed WiFi and wireless charging points for phones. Capitalising on the Group’s expertise in food and beverage, there will also be a destination ground floor bar/restaurant, with a courtyard garden, accessed via Church Lane, as well as a retail element on the ground floor.

The news of this latest development follows the announcement last month that Beannchor has invested £250,000 in the launch of a new Little Wing Pizzeria in Enniskillen, Co. Fermanagh this summer. The opening of Beannchor’s new hotel next year will bring the Group’s total number of employees to over 750.

Commenting on the announcement, James Sinton, finance director, Beannchor said: “Hospitality is one of Northern Ireland’s most important industries and, looking to the future, it will be one of the main drivers of sustainable economic growth. Ongoing investment in the sector is crucial and Beannchor is proud to continue to invest in hospitality, with the development of this new hotel in Belfast city centre.

“This latest investment of around £4million follows our major investment of over £20million in the hospitality industry in recent years and will be a major economic boost to the city centre and the wider hospitality sector.

“The creation of 100 new full time and part time jobs will be good news for Belfast. Beannchor prides itself on creating long and meaningful careers (underpinned by our ongoing staff training and development programmes) in one of Northern Ireland’s most exciting industries”

The development of the new property will be overseen by Beannchor’s longstanding project team, including John Busteed Architecture and Design who has completed recent projects such as Sixty6 Belfast and Little Wing, Holywood for the Group.

Commenting on the announcement, Conall Wolsey, director, Beannchor said: “We’re delighted to be bringing a new hotel concept to Belfast and Northern Ireland. This will be a hotel that we see as relevant to the modern day life of our customers; a hotel led by design, technology, efficiency, all in a friendly atmosphere, with the service that Beannchor is renowned for within the hospitality industry.

“The life of the hotel will be the public ground floor space, which will feature a restaurant, bar and coffee shop. We see this space being used day and night by a range of people, not just hotel guests. It will be a place where people can work, relax and socialise, within Belfast’s vibrant social scene in the heart of the city centre.” 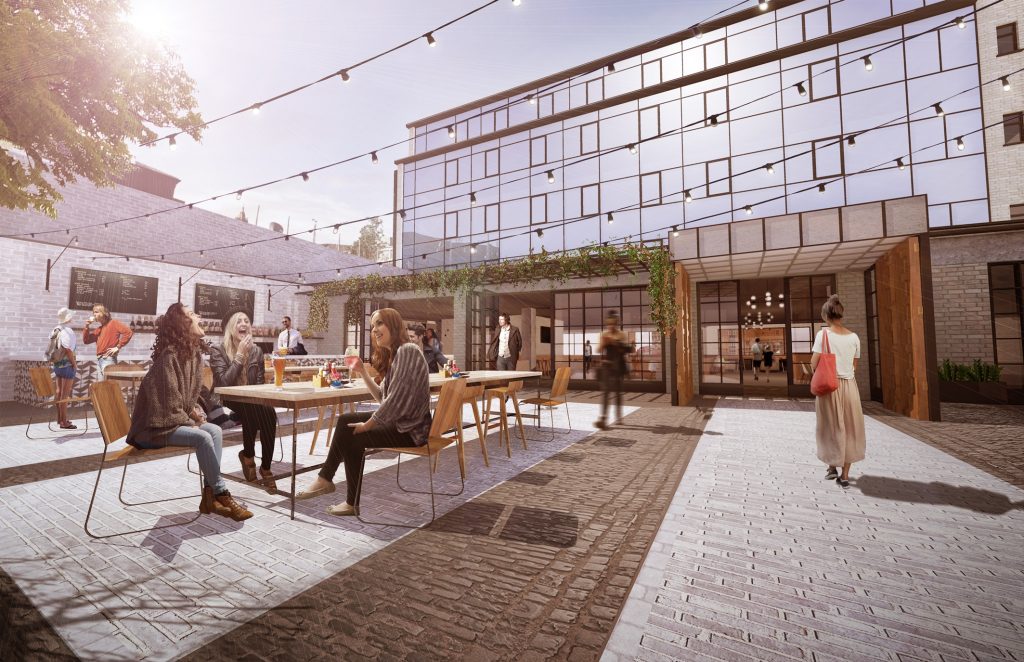 Artist’s Impression: The Beannchor Group has announced plans to open a new Belfast hotel in early 2016. The hotel will be situated in Lagan House, formerly occupied by the Department of Justice, which wraps round Victoria Street and Ann Street in the heart of the city centre. Representing an investment of £4million, the launch of Beannchor’s new hotel next year, will create 100 new jobs. Picture by Kelvin Boyes, Press Eye.