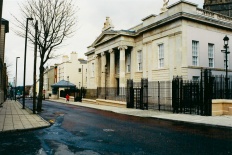 DETECTIVES have welcomed a 32-month sentence handed down today to a drug dealer.

And a senior officer has warned other dealers: “If you are caught you will go to prison”.

Richard Callaghan, 42, received a 2 year and 8 month sentence at Derry Crown Court for being concerned in the supply of cocaine and herbal cannabis.

Callaghan will serve one year and four months in prison and 1 year and 4 months on licence.

Callaghan was arrested in the Marlborough Road area of Derry on 13th June 2014.

The arrest followed the search of a green Audi car that he had been travelling in and a wheelie bin that was in the vicinity of the car. C

lass A and class B drugs with a value of approximately £130,000 were recovered by officers.

Welcoming the sentencing, Detective Inspector Tom McClure, from PSNI Reactive and Organised Crime Branch, said: “This sentence is the result of a substantial proactive investigation.

“Others have yet to come before the courts but the message from this sentence is clear: all those involved in the supply chain of large quantities of controlled drugs can expect to go to prison when they are caught.

“Police will work to ensure Northern Ireland remains a hostile environment for those who seek to benefit in any way from peddling the misery of drugs.”

Inspector McClure added: “I would ask that anyone with information relating to the use or supply of illegal drugs should contact police on 101. Alternatively reports can be made anonymously through independent charity Crimestoppers by ringing 0800 555 111.”