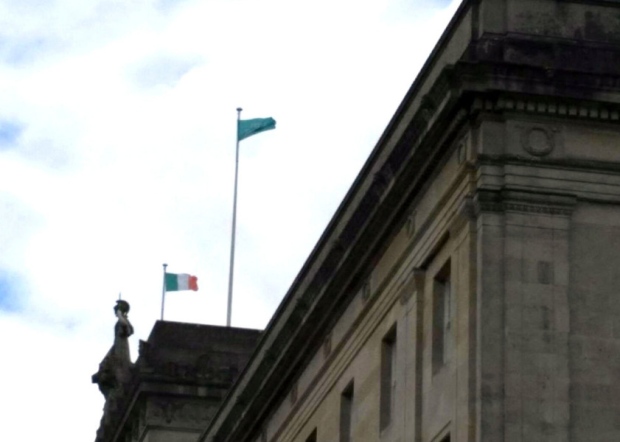 A pro-independent Ireland group has admitted that its members put up the Tricolour over Stormont buildings last week.

The ‘1916 Societies’ said it breached security at Stormont in an effort to highlight the “continued British rule in Ireland”.

However, it denies that it is a “shadowy group” saying it is “open, transparent and engaging”.

The flag row incident is currently being investigated by the PSNI with seven detectives working on the case.

The DUP reacted with fury to the hoisting of the Tricolour and its sister flag over Stormont.

However, Sinn Fein chief Martin McGuinness described the unionist reaction as “much ado about nothing”.

And the SDLP condemned the amount of police resources being deployed to investigate the incident.

In a statement, the ‘1916 Societies’ said: “On Wednesday 3rd of June, members of the 1916 Societies, taking advantage of lax security at the Stormont Assembly in Belfast, accessed the roof of the building, using the opportunity to raise the Irish National Flag and its sister flag, the flag of the Irish Republic.

“While only a symbolic gesture, nevertheless the actions concerned reflect the enduring reality that six Irish counties remain under foreign dominion, against the democratically-expressed wishes of the Irish people.

“Our intent was to further awareness of this matter at a time when the normalisation agenda of the British state, aided by local proxies of various political hue, continues unabated in its drive to legitimise the continuing occupation of Ireland.

“The political and media response, the extremities of some aside, points to a successful outcome, that the constitutional status of the Six Counties is far from resolved suitably reinforced.

“The Irish Flag at Stormont asserts that British rule is based on conquest, is without legitimacy, and usurps the sovereign will of the people.

“Britain has no democratic title in Ireland and should withdraw, leaving the Irish people in peace to determine their own future, together and without external impediment.

“Until the day full freedom is restored and the Tricolour flown over All Ireland, the 1916 Societies will continue to highlight the undemocratic British presence in our country and resist all efforts to normalise that presence.

“British rule, no matter its guise, remains unacceptable and will always be thus.

“Actions such as last Wednesday’s, while only a small gesture, help empower that end. The work to achieve Irish freedom and a meaningful peace continues.”

The 1916 Societies were formed in 2009 and believe in an “an independent and democratic republic of Ireland” as set out in the 1916 Proclamation, “that the Irish Nation is sovereign, and that the Irish people, free from external impediment, have an inalienable right to determine their own future”.

The group’s mission statement adds: “Our movement, though relatively young, is already at an advanced stage and among the fastest growing of its kind at present in Ireland.

“We are currently engaged in a wide range of work at the political, cultural and educational level and are beginning to see significant dividends arise from our efforts.

“It is clear to us an appetite for meaningful change exists in our country today.

“On that basis we seek a union of progressive forces to establish an All-Ireland Republic in line with our national rights.

“We believe our flagship ‘One Ireland One Vote’ initiative – our demand for a 32-County referendum on Irish Unity – offers a perfect conduit to secure that end.

“Britain’s illegal partition of Ireland and ongoing presence in the North is without mandate, usurps the will of the people and is in breach of natural law.

“Furthermore, any process that allows Britain to set the parameters of Irish democracy violates the principle of self-determination and should be rejected.

“Accordingly, we consider ‘One Ireland One Vote’ as a means to resolve the continuing crisis in Ireland, through restoring our inalienable right to national self-determination, itself a notion which rests at the heart of international law.”