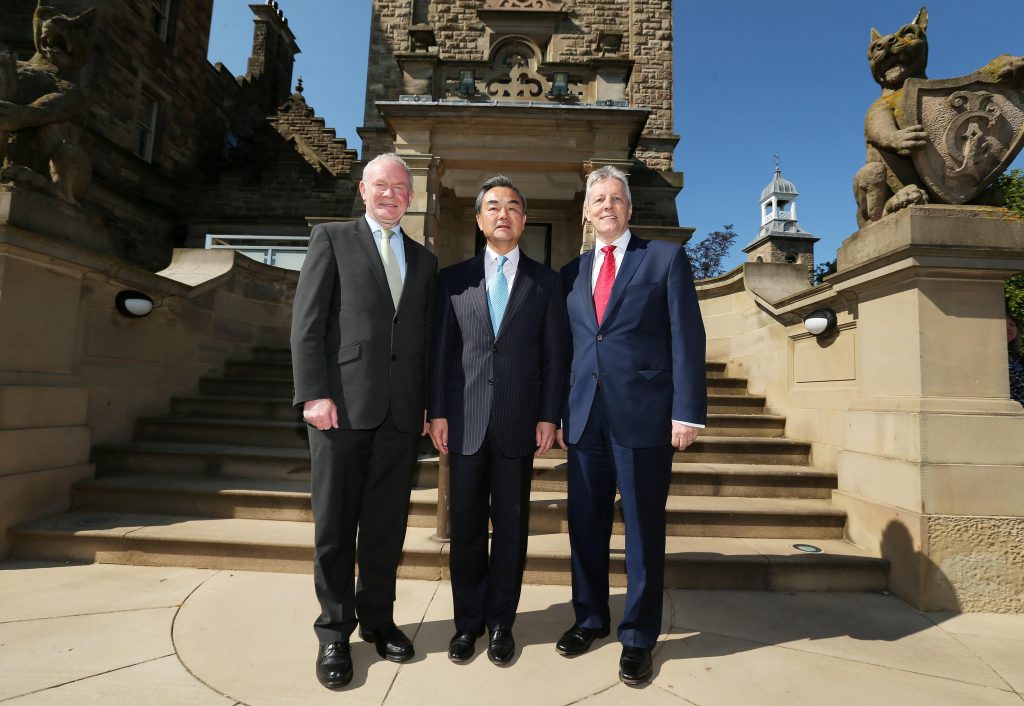 FIRST Minister Peter Robinson and deputy First Minister Martin McGuinness met with the Chinese Foreign Minister, Wang Yi at Stormont Castle yesterday ahead of the inauguration ceremony of the Chinese Consulate in Belfast.

Speaking after their meeting with Minister Wang Yi the First Minister Peter Robinson: “I am delighted to welcome Foreign Minister Wang Yi to Belfast. Over recent years Northern Ireland has developed a strong and increasingly positive relationship and bond with partners in China.

“This will be further enhanced with the establishment of the Consulate in Belfast.

“In April 2012, Vice-Premier Madame Liu Yandong visited Belfast and launched the Confucius Institute which has flourished and developed remarkably.

“As a result, eight classroom hubs have been established and thousands of local children in over one hundred schools are learning the Mandarin language and about Chinese culture, as part of the Confucius programme. These relationships have brought considerable mutual benefit to students and teachers in both our regions.

“We are hopeful that this will extend to agriculture, economic cooperation and increased trade.

“The potential for Northern Ireland companies to prosper in the Chinese marketplace is endless. Invest NI recognises this opportunity and has established offices in Beijing and Shanghai.

“Along with the Executive Bureau in Beijing, this represents a long term commitment by the Northern Ireland Executive to develop and grow our relationship with China.”

“This is a very exciting development for all of us in the north of Ireland with the Chinese government demonstrating a firm commitment by establishing a Consulate here led by Madam Consul-General Wang.

“We are keen to strengthen government to government relations and to further develop, trade, investment, cultural and education links with China. Agriculture Minister Michelle O’Neill, has just returned from a hugely positive visit to Beijing.

“The developments in the agricultural sector have been helped by the invaluable work of the Bureau with the Chinese Government in Beijing, the Consulate in Belfast and the Chinese Friendship Association.

“Our relationship with China continues to grow and we look forward to working with China to help create jobs, promote prosperity and at the same time promote mutual understanding of our different cultures.”