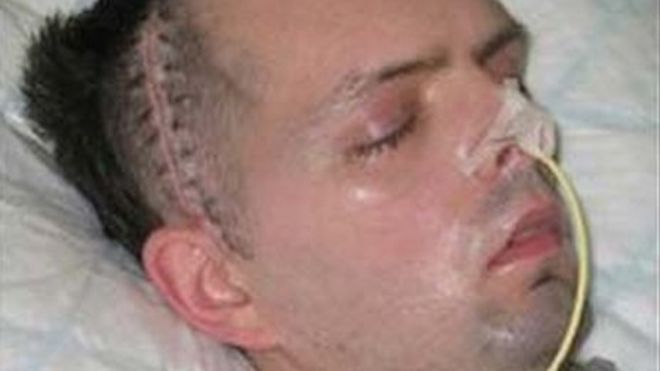 Paul McCauley, who the victim of a sectarian attack nine years ago, died this morning from his injuries

DETECTIVES are now starting a murder inquiry after a man who left in a vegetative state after a sectarian attack in 2006 tragically died this morning.

Paul McCauley died in the early hours of Saturday morning in a care unit in Derry.

His family, who had been a constant at his bedside for nine year, was at the unit with him.

Now the PSNI’s Major Investigation Team probing the attack have now opened up a murder inquiry.

The civil servant was 30 when he was attacked by a mob at a barbecue in the Waterside area.

And he never regained consciousness.

Daryl Proctor, who was convicted of the attack and given a 12-year jail term, was released in February this year.

Mr McCauley suffered multiple injuries, including a brain haemorrhage and a fractured skull, when he and two friends were beaten by a gang of youths.

He also had two heart attacks on the way to Altnagelvin Hospital.

In 2014 PSNI Chief Constable George Hamilton apologised to the McCauley family for not bringing more people to justice for the attack.