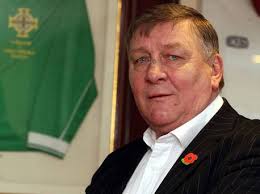 ‘WAKING The Dead’ detectives have at last go taped interviews given by a former loyalist prisoner gave to the Boston College project.

Senior judges in Belfast have lifted an injunction on the PSNI’s Terrorist Investigation Unit (TIU) taking possession of Winston ‘Winky’ Rea’s kiss-and-tell all recorded account to a loyalist researchers.

TIU detectives were present at the High Court in Belfast today with a bag ready for the handover of the tapes.

It now leaves the Red Hand Commando boss sweating on the next PSNI if he has implicated himself in terrorist activities, including murder.

The hand over took place after his legal team ran out of road in trying to keep the PSNI’s hands off the tapes which have held under lock and key for months in the Royal Courts of Justice building in Belfast City Centre.

Their last ditched bid was with the European Court of Human Rights in Strasbourg who kicked their application for an interim injunction into touch.

The judge said the time had come “to lift the injunction and allow the materials to be examined by the police”.

TIU detectives want to access the recordings as part of their investigations into murder and other paramilitary crimes from the 1970s to 1990s.

During that period ‘Winky’ Rea was a member of the Red Hand terror group, rising up its ranks to become its brigadier-in-chief.

Those tapes are now being scrutinised at a top security police base in Belfast where TIU is housed.

Rea could know within a fortnight if he is to face questioning over the tapes.