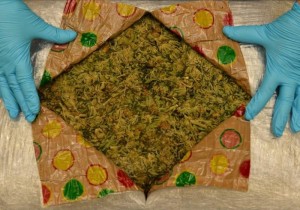 DETECTIVES from the PSNI’s Reactive and Organised Crime Branch have charged a 23 year old woman with possession of class B drugs, possession with intent to supply class B drugs and money laundering offences.

She is due to appear at Belfast Magistrates’ Court tomorrow, Thursday, June 4.

As is normal procedure the charges are reviewed by the Public Prosecution Service.

Detective Inspector Andy Dunlop said, “The charges follow the seizure of herbal cannabis worth an estimated £100,000 at an address on the Upper Newtownards Road in Belfast on Tuesday 2nd June.

“The arrest and seizure was made as part of an ongoing investigation into the importation of cannabis into Northern Ireland in which there have now been 18 arrests and 12 people charged. ”

Around £1 million of ‘skunk’ cannabis was seized two months ago following a protracted investigation into a Chinese triad gang smuggling drugs into Northern Ireland from Italy.

Police believe that a total of £10 million of the drug had been imported before it smashed the operation.