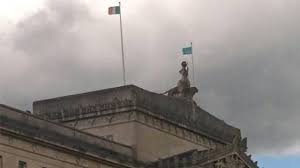 Mr Weir said: “Whatever the motivation behind this there must be a full explanation from the Assembly as to who had access to the flag poles and who was responsible for this action.

“If it was carried out by someone working for an outside contractor then this surely would represent a breach of contract which should result in sanction.

“It would also place an onus on the company to take disciplinary action against those responsible. I have inquired too whether the Union Flags, flying to mark Coronation Day, were interfered with yesterday (Tuesday).

“I have been assured by the Assembly that these were rogue actions and are being fully investigated.”

The PSNI said it is currently investigating the incident which is said to have lasted around ten minutes.