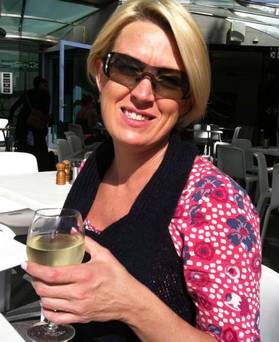 His hopes of getting away with his wife’s murder were dashed even before the jury in Sydney, Australia made its decision.

The panel of eight men and four women did not know that Cullen asked Justice Ian Harrison to direct the jury to acquit him of the stabbing murder of Victoria Comrie Cullen last Tuesday, arguing the prosecution had not proved its case.

But the judge rejected the application, noting the “ferocity” of the attack on Ms Cullen.

Cullen, 51, sat in the NSW Supreme Court dock with his head in his hands, and silently cried for about 20 minutes after that decision, even when the jury returned to their seats.

Earlier today, after three-and-a-half hours of deliberations, the jury did find him guilty of murder, rejecting his claims that he was provoked into slitting his wife’s throat, and was acting in self-defence.

Friends of Ms Cullen let out a loud sob as the verdict was handed down. Cullen appeared unmoved.

Outside court, Ms Cullen’s friend Renee Jomaa said her death was devastating, and would have a lasting impact.

“The trial detailed Comrie’s brave battle as a victim of domestic violence, and a terror she did not escape,” Ms Jomaa said, through tears.

The body of the 39-year-old Irish beauty therapist was found face down and slumped over in the car park of a fishing club in Taren Point on January 22, 2014. Her throat was cut, her nose was broken, her face was badly beaten and her clothes were soaked in blood.

Cullen emerged from mangroves in nearby Woolooware Bay hours after police arrived, claiming Ms Cullen had “taunted” him about her sex life with other men and he “lost it”.

He pleaded guilty to manslaughter, claiming Ms Cullen had also stabbed him.

But there was strong evidence that Cullen had planned to kill his estranged wife that morning.

When a local court decided in Ms Cullen’s favour in a case about the couple’s car, Cullen followed his wife to her apartment in Sutherland.

Neighbours heard a woman screaming, and a man saying “Just wait in the car”. Spots of blood were later found in the garage of the unit block.

The jury heard it was likely that Cullen beat her and bundled her into the boot.

Cullen then drove to a camping shop and bought a set of fishing knives labelled “guaranteed sharp”, and a change of clothing, before driving to the St George and Sutherland Shire Anglers Club.

The trial heard evidence that Cullen, who kicked Ms Cullen out of their house in October 2013, had long been abusive towards her, suspecting her of having an affair, and calling her a “slut” and a “whore” in front of their friends.

Ms Cullen had in fact had a brief affair with a young Danish man named Nick Baastrup, but that ended a month before her death.

At one point after their separation, Cullen called police to report that Ms Cullen had arranged for a boyfriend to beat him up on her birthday.

Cullen told police he didn’t see anyone before or after he was allegedly hit on the head near his Sylvania home, and no one was ever arrested.

Ms Cullen was distressed at the allegation, and told police: “I did have an affair, it was nothing serious and I do not have a boyfriend.”

Cullen also tried to cut her off from her friends, and her workmates, once dumping her belongings on the street, and turning up to her work holding signs saying: “Comrie Cullen is sleeping with clients.”

Friends told the court the Cullens’ marriage was “loveless”, and that Ms Cullen said he had raped her several times.

Ms Cullen’s boss Christina Arciuli said Cullen had threatened to kill his wife so often it had almost become a joke.

“In a way, it had become, between us, a bit of a laugh, but not in a funny way, how many times she was going to be killed in one week.”

Cullen will be sentenced at a later date.