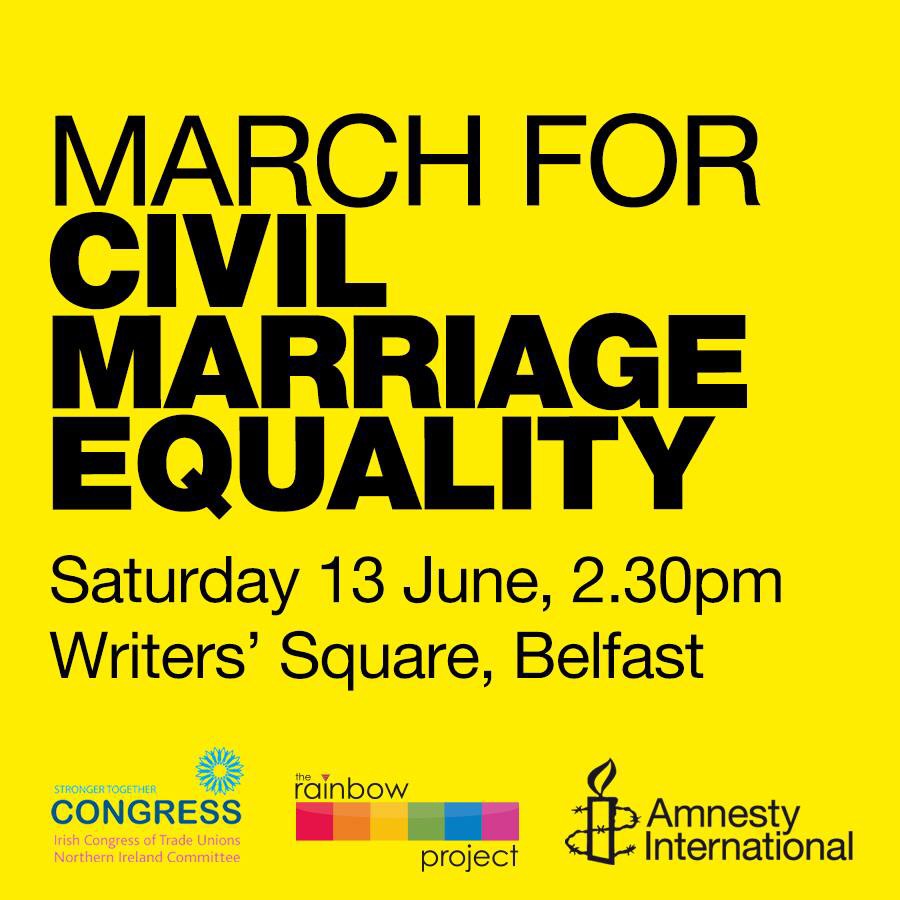 It comes after the Republic yesterday voted in favour to allow gay and lesbian couples to get married.

Next month, a rally will be held at Writers’ Square in Belfast to call for a change in Northern Ireland’s legislation.

The campaign is backed by the Rainbow Project, the Irish Congress of Trades Union NI Committee and Amnesty International.

It will take place on Saturday, June 13 and is expected to attract thousand of people from the LBGT community.

Earlier today, one of the Republic’s most senior Catholic clerics has called for the Church to take a “reality check” following the country’s overwhelming vote in favour of same-sex marriage.

The first gay marriages are now likely to take place in the early autumn.

Diarmuid Martin, the archbishop of Dublin, said the Church in Ireland needed to reconnect with young people.

The referendum found 62% were in favour of changing the constitution to allow gay and lesbian couples to marry.

The archbishop said: “We [the Church] have to stop and have a reality check, not move into denial of the realities.

“I appreciate how gay and lesbian men and women feel on this day. That they feel this is something that is enriching the way they live. I think it is a social revolution.”

The archbishop personally voted “No” arguing that gay rights should be respected “without changing the definition of marriage”.

“I ask myself, most of these young people who voted yes are products of our Catholic school system for 12 years. I’m saying there’s a big challenge there to see how we get across the message of the Church,” he added.

The Republic is the first country in the world to legalise same-sex marriage through a popular vote.

And its referendum was held 22 years after homosexual acts were decriminalised in the Republic of Ireland.

Among those voicing their approval of the outcome was UK Prime Minister David Cameron who tweeted: “Congratulations to the people of Ireland, after voting for same-sex marriage, making clear you are equal if you are straight or gay.”

Out of 43 constituencies, only the largely rural Roscommon-South Leitrim had a majority of “no” votes.

The yes vote means an amendment will be made to Article 41 of the constitution, stating that being of the same sex is no longer an impediment to marriage.

The government must bring in a new law, the Marriage Bill 2015, to give effect to the amendment and it says it hopes to do that by the time the Irish parliament breaks up in the summer.

This means the first actual marriages are unlikely to take place until September.