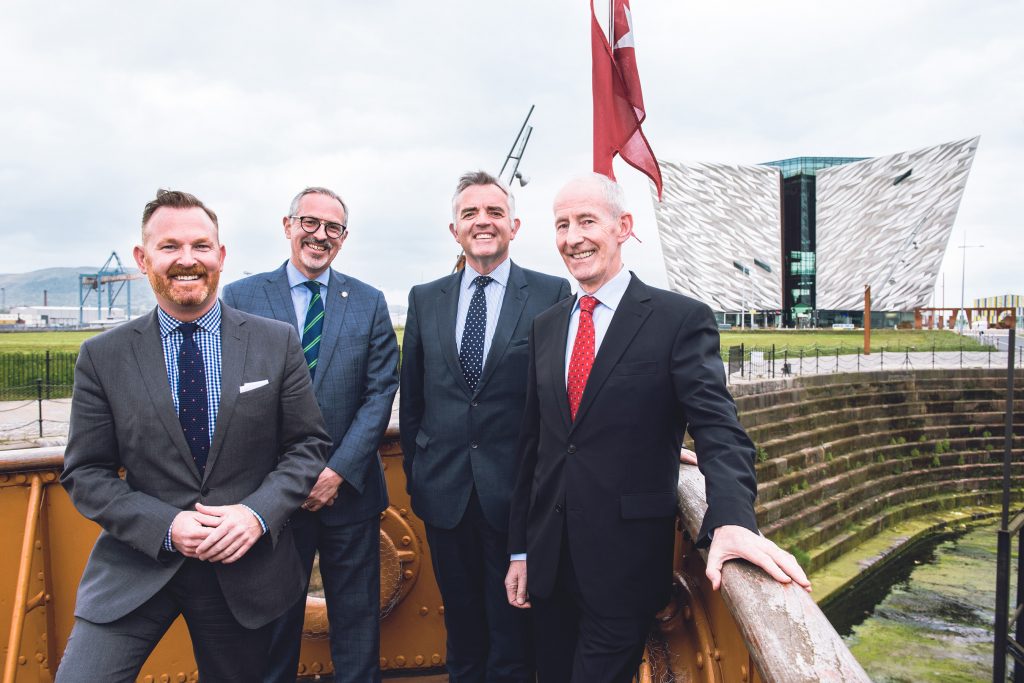 The Association of Leading Visitor Attractions (ALVA) held its best attended council meeting, since its formation 25 years ago, at the world’s largest Titanic visitor experience.

Over 60 directors and senior managers from the UK’s leading attractions including Houses of Parliament, Victoria and Albert Museum, Edinburgh Castle, Harry Potter Studio Tours and St Paul’s Cathedral gathered at Titanic Belfast for a pre-council meeting dinner on Wednesday night, where they were welcomed by Enterprise, Trade and Investment Minister Jonathan Bell.

Tim Husbands MBE, Titanic Belfast’s Chief Executive and ALVA Board member, commented, “We were delighted to welcome the largest gathering  of UK tourism leaders since ALVA’s inception 25 years ago, at Titanic Belfast.  It was the first-time the council meeting has been held in Northern Ireland. The majority of participants flew in for the event, which reinforced the fact that Titanic Belfast is considered within the industry as one of the best tourist attractions in the UK and so creating a significant financial benefit for the city.”

He continued, “Many of the participants have extended their stay for the bank holiday weekend, which is great news for Belfast and Northern Ireland. It represents how popular Belfast is becoming as a destination of choice for tourists. We are very proud of the significant role that we have and will continue to play in putting Belfast on the tourism map.”

Speaking at the Titanic Belfast reception, Minister Jonathan Bell said: “The appointment of Tim Husbands to the ALVA Board, the first time that Northern Ireland has been represented within this prestigious association, and the decision to hold its quarterly meeting being here for the first time is recognition of the hard work being done by our tourist providers and stakeholders.”

“Titanic Belfast is an amazing attraction which Northern Ireland is rightly proud of it. More than two million people from over 145 different countries have been to visit since it opened in 2012. This is proof that the investment, imagination and energy that went into this attraction keeps paying dividends and it is a success story that keeps on running. Continuously raising the quality and standards of the tourism offer is key to attracting more out-of-state visitors and in growing towards our target of tourism becoming a £1 billion industry by 2020.”

The event kicked off with a guided tour of the world-class experience, which has been by described by the Prime Minister as ‘absolutely brilliant’ and ‘magnificent and dramatic’ by TITANIC movie director, James Cameron. The tourism leaders were also able to preview Titanic Belfast’s new galleries before their official launch and were treated to a drinks reception on the SS Nomadic and a White Star dinner at the Titanic Suite.

Since opening in March 2012, the world’s largest Titanic visitor attraction has welcomed 2.1 million visitors from over 145 countries and scooped Northern Ireland Tourist Board’s first-ever 5-star attraction accolade. It also recently beat off stiff competition to be named Europe’s best visitor attraction for groups as well as being awarded a ‘Gold Standard’ Investor in People accreditation.

Titanic Belfast and the SS Nomadic are open to the public with a full programme of events, for more information, go to www.titanicbelfast.com.