EWE CANNOT BE SERIOUS! OLIVIA THE SHEEP FOUND BY GARDAI IN DUBLIN FLATS 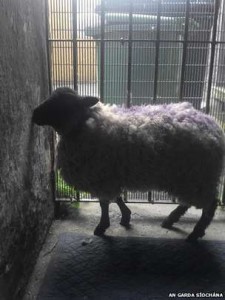 TWO Gardai have had their legs pulled after picking up a sheep at a block of flats in Dublin city centre.

The ewe was discovered in Oliver Bond flats on Wednesday night, when a police patrol saw children chasing the animal.

Officers put the sheep into a patrol car, took it to a Garda station and then called the Dublin Society for the Prevention of Cruelty to Animals [DSPCA].

A source said: “The boys in the station had great fun with lads when they came back on Wednesday night. It was gas!”

A Garda spokeswoman said it was the fourth sheep they have had to pick up from the city centre over the last 18 months.

The ewe was said to be in good health and has been transferred from the station to DSPCA facility in Rathfarnham, south Dublin, where she has been given a new name.

DSPCA spokeswoman Gillian Bird told the BBC: “She is from the Oliver Bond Flats so we have named her Special Agent Olivia Bond, Licensed to lamb.”

She added that it was illegal to keep a farm animal without a licence and although there are some city centre farms in Dublin, a flat complex was not an appropriate setting to keep a sheep.

Ms Bird said it was “not unusual” for farm animals to be stolen and brought into the city, and that some thieves did it “for fun”.