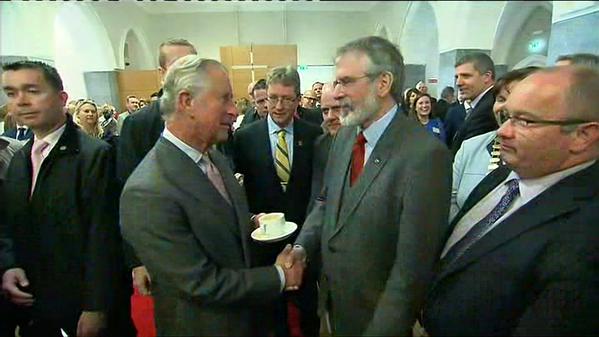 Prince Charles and his wife Camilla arrived in the west of Ireland this morning at the start of a four-day visit.

Mr Adams had asked to meet the Prince of Wales during the visit.

It is the first meeting in the Republic between Sinn Féin leadership and a member of the British Royal family since partition.

Mr Adams said he hoped the meeting would assist the process of peace and reconciliation in Ireland.

However, in west Belfast his party MP Paul Maskey was backing the families of the Ballymurphy Massacre who opposed the visit of Prince Charles.

Other families in Derry also opposed the Royal visit as Prince Charles in Colonel-in-chief of the Parachute Regiment.

Speaking as he arrived at Galway University, Mr Adams said he would be thinking not only of the victims of the IRA bomb attack in Mullaghmore, Co Sligo, which included the prince’s great uncle Lord Mountbatten, but also of other victims of the Troubles.

Mr Adams said he would express regret at the IRA’s murder of Lord Mountbatten, but stressed his meeting with Prince Charles would be one of equals.

Mr Adams also said he stood over remarks he made at the time of the killing that Lord Mountbatten knew the danger involved in coming to this country and that, given his war record, he could not object to dying in what was clearly a war situation.

In 2012, Mr McGuinness shook hands with Queen Elizabeth at a function in Belfast’s Lyric Theatre in his capacity as Northern Ireland’s Deputy First Minister.

However, the previous year Sinn Féin declined to let Mr McGuinness accept an invitation to a State banquet at Dublin Castle during the Queen’s historic visit.

Prince Charles said he has been overwhelmed by the welcome and enthusiasm offered to him by the Irish people.

Speaking at Galway University this afternoon, he said it was a great pleasure for him and his wife to be in the west.

He said they were looking forward to their short visit and he was particularly interested in his trip to the Burren, a place he said he had wanted to go to for some time.

Earlier, deputy Irish Prime Minister, Tánaiste Joan Burton welcomed the royal visitors to the west of Ireland, saying that relations between the two countries were greatly enhanced by such trips.

Ms Burton said she hoped they would enjoy the landscape and the culture the region has to offer.

Deputy Breen said it was a pleasure to welcome the prince and the Duchess of Cornwall to Ireland and said it was a significant day for Shannon and Clare as well as the entire nation.

The couple are in Galway where they have a number of engagements.

Their visit began with a trip to NUI Galway where Prince Charles is expected to make the first of two scheduled speeches.