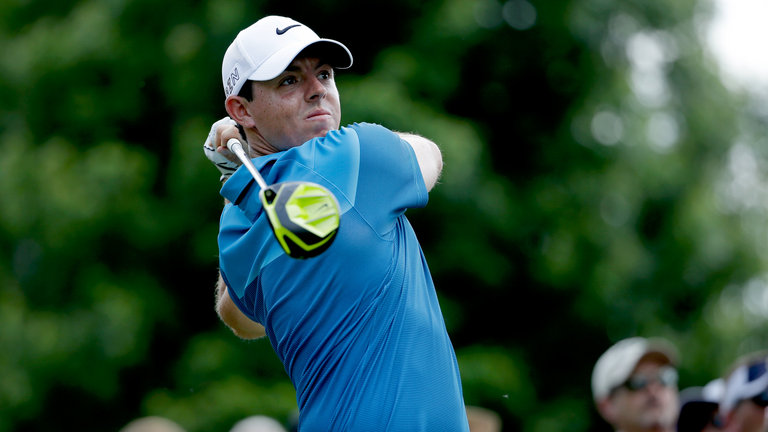 McIlroy’s overnight four-stroke lead was barely threatened throughout the final day at Quail Hollow as he fired a solid final-round 69 to become the first two-time winner of the event.

the world No 1 was the overwhelming favourite to emulate his breakthrough win in 2010 after his scintillating third-round 61 had given him a commanding lead, which was extended to five shots when playing-partner and nearest challenger Webb Simpson bogeyed the opening hole.

There was a glimmer of hope for Simpson and the field when McIlroy three-putted the second green, and Simpson rolled in a good putt for a birdie to shave the deficit to three

But Simpson dropped another shot at the next and, after matching McIlroy’s cast-iron birdie at the long fifth, the American three-putted from inside six feet at the sixth for a double-bogey.

Both birdied the seventh, and Patrick Rodgers then emerged as McIlroy’s biggest threat when he made three birdies in five holes to cap an outward 34, and he then followed with an eagle at 10 and another birdie at the 11th.

Rodgers then reached 17 under with further birdies at 14 and 15 that hauled him within three of the leader, but his hopes of pulling off a huge upset vanished when he found water off the tee at the treacherous 17th.

McIlroy faltered on the greens for the first time in the week, but he still managed to pick up shots at the 12th and 14th before turning on the style at the 508-yard 16th, where he smashed a 364-yard yard drive over the corner of the dogleg and clipped a gap wedge to 18 inches for a tap-in three.

The 26-year-old dropped a shot at 17 after a poor pitch from right of the green, but it scarcely mattered as he walked to the final tee armed with a seven-shot lead when Rodgers bogeyed the last to finish on 14 under.

Simpson managed to salvage a 72 as he played the fearsome Green Mile in three pars to earn a share of second with Rodgers, leaving the stage clear for McIlroy to roll in a confident putt for par to finish on a remarkable 21 under par and claim the 11th PGA Tour title of his career.

Phil Mickelson briefly got into the mix as he made three straight birdies on the front nine and added another at the 10th to claim a share of second on 12 under, but he then bogeyed the next two holes.

The left-hander rallied with birdies at 13 and 15 as he returned a 68 to finish in a tie for fourth alongside Gary Woodland (67) and Robert Streb (71).