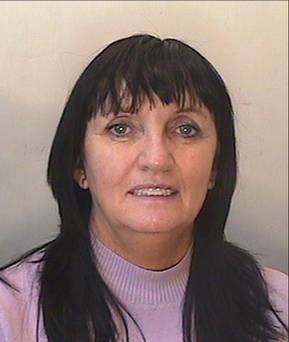 BADLY decomposed remains found in a house this morning could be that of wanted fraudster Julia Holmes and her partner.

Gardai in the Republic are waiting for post mortems to confirm if it is that of the Co Down woman and Thomas Ruttle.

Holmes, 63, has been at the centre of a worldwide police hunt for the past number of years.

She had recently been traced to a farm house in Boolaglass, Askeaton, Co Limerick, which she had been renting.

Holmes is wanted by the FBI, the PSNI and Gardaí over a series of frauds.

The badly decomposing bodies of the woman and man were discovered in an upstairs bedroom by Gardai at around 3 am this morning.

Gardai are investigating a number of lines of enquiry, including murder suicide.

Ms Holmes, and the owner of the house, Thomas Ruttle, who is aged in his 50s, had not been seen for the past few weeks.

Gardai said they could not yet confirm if the bodies were that of the missing pair.

“The bodies are decomposing so it’s hard to say who they are. We don’t want to say it’s them if it’s not, for obvious reasons,” a Garda source said.

Gardai believe Mr Ruttle had a number of licensed firearms, including a shotgun and a rifle.

At least one firearm has been found at the scene.

Gardai said they could not say how the man and woman died, however it’s understood a gun was found in the bedroom near the bodies.

The State Pathologist, Dr Marie Cassidy was expected to attend the scene in West Limerick to carry out a preliminary examination of the bodies before she conducts full post mortem examinations later this evening.

Julia Holmes, who is alleged to have used different aliases including, Croen Ruttle, Dr Watson, Julia Watson and Celia Watson, is wanted by the PSNI after going on the run in 2011.

She disappeared from her home in Ballynahinch, Co Down, in January 2011. A warrant for her arrest was issued when she failed to turn up to court in Newtownards for a series of alleged frauds totalling £18,000.

She was previously deported to Northern Ireland from the United States in 2006 after she was arrested in connection with a $500,000 property scam.