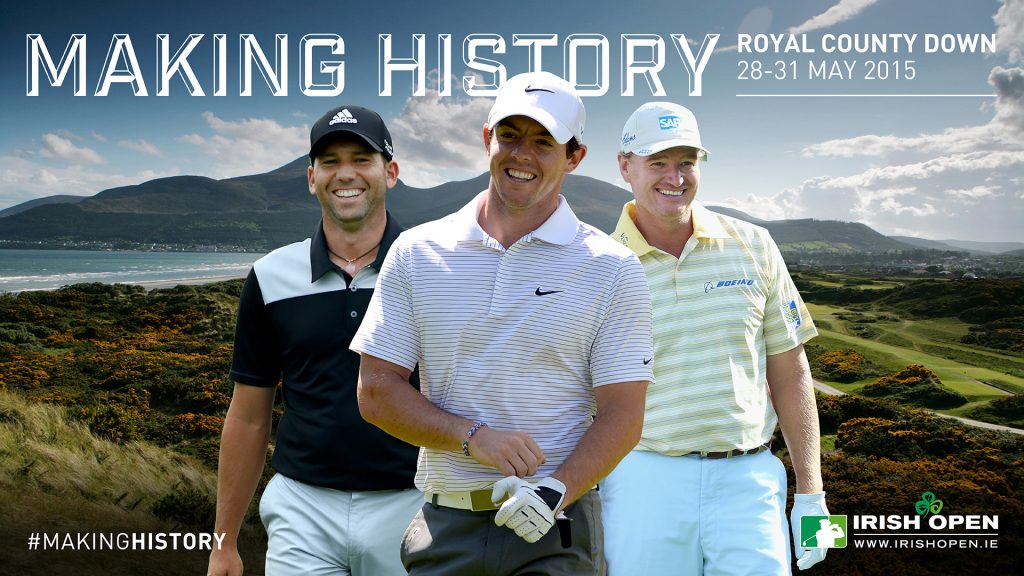 THE entry deadline has now closed and the star-studded line-up confirmed for this year’s Dubai Duty Free Irish Open hosted by the Rory Foundation.

A truly international field will see 156 players from more than 20 countries converge on Royal County Down from May 28-31 to fight it out for a €2.5 million prize fund in one of the most eagerly anticipated Irish Opens in the tournament’s illustrious history.

An exceptional field for the event will include no fewer than 16 of the world’s top 50 players, led of course by Northern Ireland’s world number one and four-time major champion, Rory McIlroy, whose influence as tournament host cannot be over-emphasised for attracting so many of the sport’s superstars.

Two players who will be looking forward to competing in this year’s tournament are the in-form Rickie Fowler from the US, who won the PGA Players’ Championship at Sawgrass on Sunday, and South African George Coetzee, winner of last weekend’s Mauritius Open.

Both Fowler and Coetzee won their respective events after play-offs featuring Spain’s Sergio Garcia and Denmark’sThorbjorn Olesen, both of whom are also confirmed for the Irish Open.

Other well documented star players to tee off at Royal County Down include a host of former World Number Ones including reigning US Open Champion Martin Kaymer, Luke Donald, Ernie Els and Lee Westwood.

American Ryder Cup star Patrick Reed (USA) also confirmed his participation last month but today The European Tour revealed another raft of top players who have not yet been formally announced.

French star Victor Dubuisson and crowd favourite Miguel Angel Jiminez from Spain are also both confirmed, as is Jamie Donaldson, the Welshman who has risen dramatically up the world rankings and become a Ryder Cup star since his maiden victory in the 2012 Irish Open at Royal Portrush.

Italy is well represented in the form of Matteo Manassero and the Molinari brothers Francesco and Edoardo, whileRobert Karlsson leads an eight-strong Swedish contingent.

Brett Rumford (Australia), Marcel Siem (Germany) and Jeev Milkha Singh (India) are amongst the rest of the field who will be hoping for a good run while other countries represented include Argentina, Chile, Korea and Paraguay.

European Tour Irish Open Championship Director Antonia Beggs said:  “We are delighted by the strength and depth of this year’s Dubai Duty Free Irish Open line-up and applaud our World Number One Rory McIlroy who has genuinely embraced his position as tournament host.

“We are thrilled that the European Tour can deliver this to our spectator audience, who will be treated to an outstanding Championship.  It was great to see Rickie and George win at the weekend and have so many other Irish Open competitors also in contention on both the European Tour and the PGA Tour.

“Now, with just two weeks to go until the first tee-off, it’s time to get down to the serious business of delivering the event for our fans and we would urge those who have not yet bought their tickets to go online, check availability and purchase their tickets as soon as possible as we don’t want to be turning disappointed fans away at the gate,” she added.

Dubai Duty Free’s Executive Vice Chairman Colm McLoughlin said:  “This year’s Dubai Duty Free Irish Open is set to be one of the best, if not the best, ever and we are delighted to be the title sponsor.

“The calibre of world class players is superb, reflected by the fact that last weekend’s Players Championship and Mauritius Open winners are amongst the great many champions who will be teeing off at Royal County Down.

“This is our first year to sponsor the Irish Open and it’s been a pleasure to work alongside The European Tour and the Rory Foundation to help make this event as good as it can possibly be, and a great advert all around the world for Northern Ireland and Ireland as a whole.”

More than 80,000 spectators are expected at this year’s Dubai Duty Free Irish Open which is hosted by the Rory Foundation and supported by Tourism Northern Ireland.

Advance tickets are currently available from £35 per day with season tickets available for £85. Families will be delighted to hear that under-16s will be admitted FREE as long as they are accompanied by an adult (up to four children are allowed with one paying adult).

Corporate hospitality tickets are also available for the event at a cost of £300 + VAT per person.  Already sold out onFriday May 29, these exclusive tickets include course admission with reserved grandstand seat on the 18th green, an official programme, reserved VIP parking (for one or two people), and generous hospitality in the Grand Ballroom in the neighbouring Slieve Donard Hotel – including breakfast followed by a Champagne Reception, a buffet lunch served with fine wines, afternoon tea and a complimentary bar.

For more information or to purchase tickets, visit www.irishopen.ie.  For information on accommodation offers and golf in Northern Ireland, visit www.discovernorthernireland.com/irish-open-2015.

Anyone travelling to the event is advised to plan their travel in advance with Translink offering a range of hassle-free and good value travel options. Click onwww.translink.co.uk/irishopen for full details.