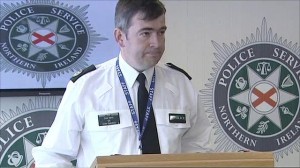 THE PSNI today revealed that that hate crimes across Northern Ireland have jumped by 25 per cent.

The police say it needs to work with a range of statutory and community partners on the issue of hate crime.

The PSNI say that historically, hate crime has been underreported, and while an increase in reporting is a challenge for PSNI, it may also be an indicator of increased confidence in policing.

Indeed, in this year’s Northern Ireland Policing Plan, a target is to increase reporting of hate crime by 3%, so this figure is likely to increase next year.

The PSNI annual crime statistics reveal that There has been a slight increase in overall crime of 2.3%.

However, the level of crime recorded in 2014/15 is the 5th lowest annual crime level recorded in Northern Ireland since new Home Office counting rules were introduced in 1998/99.

Increased confidence in policing does result in increased reporting of crime, and overall confidence in the local police as measured by the Northern Ireland Crime Survey, rose last year to 66.9 per cent (Jan 2014 – Dec 2014).

The overall downwards trend in crime over the last twelve years has generally been experienced within the main crime types of robbery, burglary, vehicle offences and criminal damage, while offences of violence against the person and sexual offences have shown an upward trend.

For offences of violence against the person the proportion in which alcohol was a contributory factor was 43 per cent.

Street level drug dealing continued to be a priority across Northern Ireland, with specific focus being placed on this issue, through Operation Torus in February/March 2015.

Senior police officers have also been very vocal over the last 12 months, about the need for community support to tackle the issue of paramilitary-style attacks.

During 2014/15 there were 94 victims as a result of paramilitary-style attacks.

“We have seen a slight increase of 2.3% in recorded crime for 2014/15, which, unfortunately, is similar to the wider trend that is being experienced right across the UK. Like all public sector organisations we are operating in an environment of reducing budgets and reducing numbers of people to deliver against the same volume of calls for service. Over the past 12 years, while reported crime has fallen by 26 per cent, calls for service have remained constant at 500,000.

“There is a view that police deal only with crime, whereas this role accounts for less than 50 per cent of PSNI activity. We are reviewing how we deliver our service, in order to prioritise resources to the greatest threat, risk, harm and opportunity.

“Working in partnership with other statutory and community organisations will become increasingly important in the coming months, as we continue to seek to keep people safe, and address the issues that have been identified by communities as a priority.”