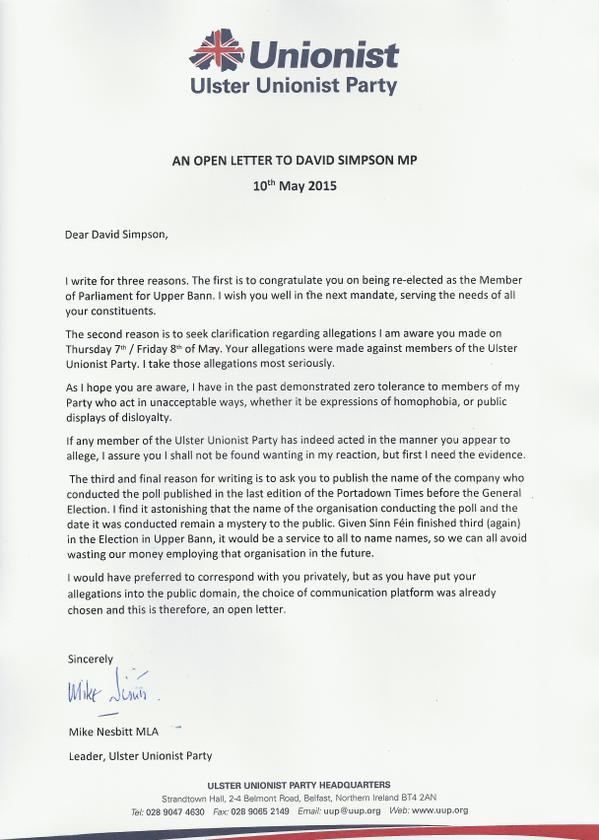 UUP leader Mike Nesbitt says he “will not be found wanting” in probing claims by DUP MP David Simpson that his family was allegedly subjected to “disgraceful” abuse during the election campaign in Upper Bann.

Mr Nesbitt says in a letter, published today, that he takes the allegations “most seriously” but needs “evidence” and “names” before he can take action.

Mr Simpson made the allegations during his victory speech on Friday morning, after he was re-elected as MP for Upper Bann.

During his victory speech, Mr Simpson challenged hecklers at the election count in Banbridge leisure centre.

Thanking his wife and three children, the DUP MP said there had been a “despicable attack on my family over the past seven weeks, absolutely disgraceful”.

He added: “I haven’t done this in 18 years in frontline politics and standing here, I call it pathetic, what was done on my family over the past seven weeks. You should be ashamed of yourselves.”

Responding to the allegations, Mr Nesbitt has penned a letter to Mr Simpson congratulating him on being elected as MP again.

He add: “If any member of the Ulster Unionist Party has indeed acted in the manner you appear to allege, I assure you that I will not be found wanting, but first I need the evidence.”