NEW HEALTH MINISTER TO BE APPOINTED 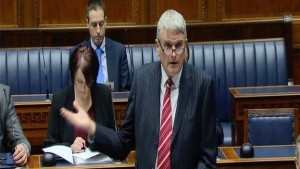 Mr Hamilton has been running the department in a caretaker role after Mr Wells resigned over his remarks during a public meeting during the south Down Westminster hustings campaign.

One suggestion is that the health department maybe split in two.

A DUP MLA could run the department of health to implement proposed cuts to the number of hospitals in the province.

A junior minister could be appointed to look after social services to take this workload off the health minister.

The DUP and Sinn Fein are expected to hold high level talks today over plans for welfare reform.