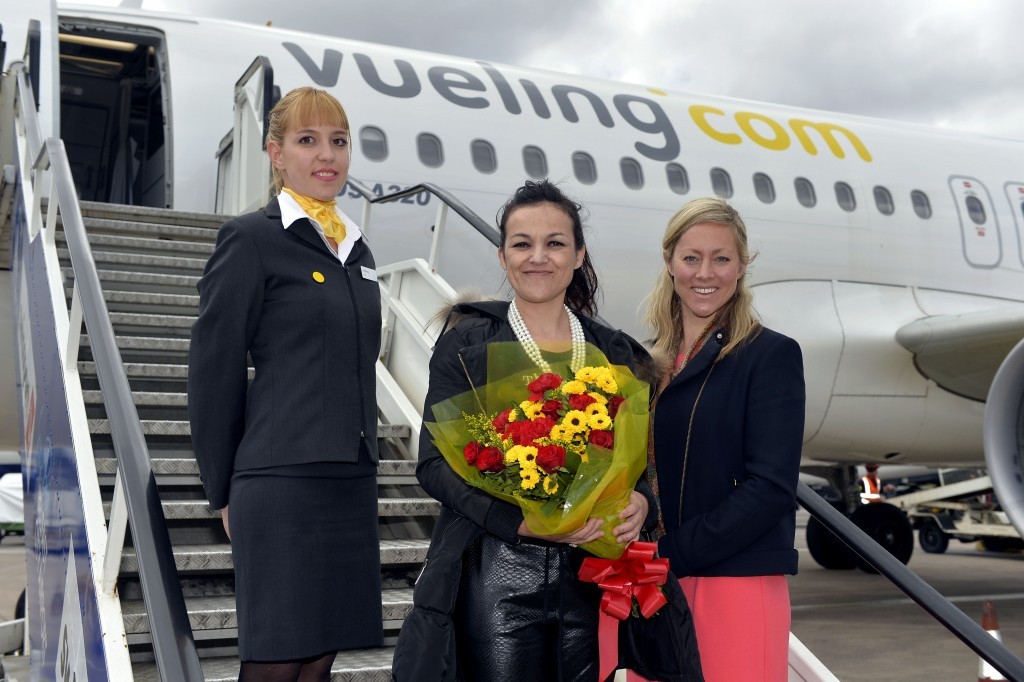 GEORGE Best Belfast City Airport has today welcomed the arrival of its first flight from Barcelona operated by Vueling Airlines, one of Europe’s fastest growing airlines.

Owned by Willie Walsh’s International Airlines Group (IAG), the Spanish airline will operate a twice weekly service (Thursday and Sunday) between Belfast City Airport and its Barcelona El Prat base. This will increase to three times weekly from 23rd June with a Tuesday service.

Belfast City Airport is one of just a select few UK airports to be included within the Spanish airline’s ambitious growth strategy announced in late 2014.

“The arrival of Vueling to Northern Ireland is hugely exciting and significant given the airline’s fast paced growth and popularity in mainland Europe.

“As a low cost yet full service airline, Vueling places customer service at the centre of its operations and strategically selects airport partners which do the same.

“Not only is the airline the fastest growing member of IAG, but it is also one of the biggest low cost airlines in Europe carrying a high percentage of business passengers which makes it a perfect partner for Belfast City given our large business passenger base.

“In addition to the convenient access to Europe for business passengers, Barcelona is a very popular destination for tourists of all ages and presents a great opportunity to attract further inward tourism to the region.

“As an island, direct flights to destinations throughout the UK and Europe are of crucial importance and the airport’s ambition to grow our own European network has witnessed great success recently with the arrival of both Vueling, and KLM which will commence daily flights to Amsterdam on 18th May.”

The airline’s arrival comes following the announcement that Routes Europe 2017 is to be hosted in Belfast. Ms Best continued:

“Welcoming two new leading airlines to Belfast City Airport in just one month is an extremely exciting time for us, and evidence of our commitment to promoting the city and Northern Ireland as an outstanding destination, not only to the airlines but other tourism bodies.

“The Routes Europe Conference provides an opportunity for all these key decision makers and influencers to experience Belfast for themselves and for everyone involved to market the region like never before. We look forward to working with Government and playing a key role in fully capitalising on the conference.”

“Today’s latest flight from Barcelona heralds another milestone in the tourism industry’s efforts to increase the number and range of flights directly into Belfast.

“We are really excited by the commitment made by George Best Belfast City Airport in attracting this new Vueling service, as it provides us with an even greater opportunity to attract international visitors from across the World to the Belfast City Region.”

Fares start at just £46.99 (one way including taxes) and can be booked at www.vueling.com/en