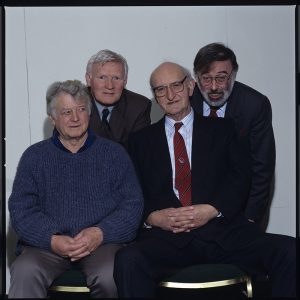 Dessie ‘The Devil’ O’Hagan was a life long member of the party and had been interned in in 1971.

He helped raise funds for both the WP and the OIRA – ‘The Stickies’ -through both legal and illegal scams.

As a result, O’Hagan had earned himself the monicker as the ‘Sticky Bagman’.

When Official IRA chief of staff Sean Garland was arrested in Belfast over the ‘Stickies’ involvement in counterfeiting the US100 dollar bill communists, he was bailed to live with O’Hagan at his Co Down home.

However, within weeks Garland had fled Northern Ireland and went back across the border.

Judges in Dublin later refused to order his extradition to the US and into the hands of the Secret Service on the grounds of his ill health.

However, he is unlikely head north for his old pal’s funeral as there is an outstanding warrant for his arrest for skipping bail.