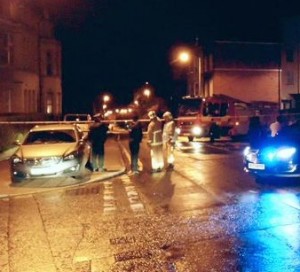 POLICE are to deploy a high visibility operation over the coming days as part of their ongoing efforts to counter the continuing dissident threat across Northern Ireland and keep communities safe.

The operation will include vehicle check points and increased noticeable patrolling.

There will also be an increase in covert surveillance by undercover units to catch the would-be bombers in the act.

On Sunday, IED bombs were left a Territorial Army base near homes in Rockport Park, Derry.

The devices partially exploded but didn’t fully detonate on Sunday night around 11.30 pm.

No warning was given to police or residents.

Last week a bomb exploded outside the offices of the Probation Service in Derry.

And large gas cylinder bomb was abandoned at Brompton Park in the Ardoyne area of north Belfast.

ACC Stephen Martin, who is in charge of District Policing, says he understands this may cause some inconvenience and is asking the public for their continued support as officers and staff seek to keep people safe.

“The dissident republican threat remains severe and, in light of the four attacks carried out in Belfast and Derry over the last two weeks, the PSNI will have an enhanced profile in local communities to provide safety and reassurance to everyone.

“I apologise in advance for any inconvenience this operation may cause, but seek the public’s support, patience and understanding in what we believe is a necessary step to attempt to prevent those with murderous intent going about their business.

“This is not a decision we take lightly and we will endeavour to ensure that the balance of how we police this threat is right, as well as trying to keep disruption to a minimum.

“However, please be assured we will always prioritise public safety.

“There is no perfect security solution to terrorism.

“Long term success against the small group of people intent on causing disruption and harm to the community needs a combination of policing, community and political efforts and it is vital we all play our part.

“I would ask people to continue to be vigilant at all times. If you see any suspicious activity or any suspect objects, please report it to police immediately.”

Anyone with information is asked to contact police on 101.

Alternatively, information can be given anonymously to Crimestoppers on 0800 555 111.