CENTRA TEAMS UP WITH ULSTER RUGBY FOR SUMMER CAMPS 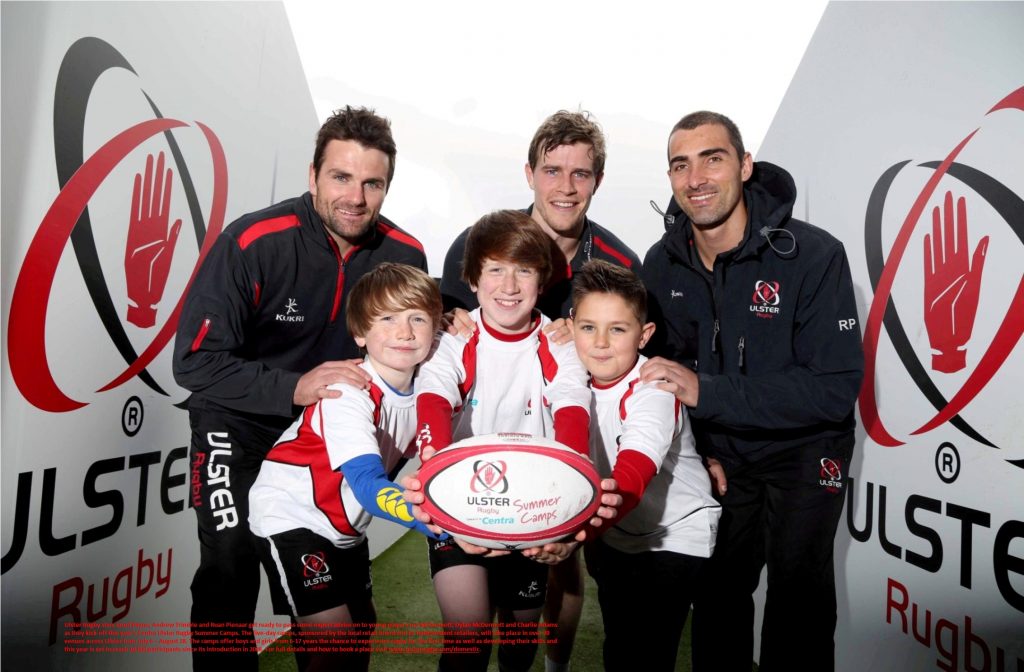 ULSTER Rugby has teamed up with local independent retail group Centra to kick off what is expected to be the biggest series of rugby Summer Camps to date.

The camps, sponsored by Centra and its independent retailers, are expected to welcome almost 2000 young players this summer at over 20 venues across Ulster from 6th July – 28th August.

The popularity of the camps have increased each year since its launch in 2008, with 1,892 taking part in 2014, this year will mark 10,000 participants who have taken part so far. Young players benefit from expert advice from qualified youth coaches with Ulster players on hand to give tips of the game, talk about life as a professional player and interact with them.

The Junior Camps for boys and girls aged 6-12 years, which offers hundreds of children a first-time experience of rugby as well as the chance to develop existing skills in a fun and safe environment.

The more experienced Senior Camp will return to Ulster University at Jordanstown for 13-17 years old boys and girls with previous rugby experience, focusing on the technical, tactical, physical, mental and lifestyle aspects of rugby.

Barry Willis, Rugby Operations Manager at Ulster Rugby, said: “This is a really exciting year for the summer camps as we get ready to welcome our 10,000th young player. The camps are a fantastic opportunity for children to receive specialist rugby training and are open to players with a mix of abilities whether they are new to the sport or building on their own experience.

“The significant support we receive from Centra as well as the continued success and popularity of the senior Ulster team all help to increase the volume of participants we have each year. We are delighted to host so many enthusiastic young players each year and it would be fantastic to see some progress up to senior level,” he added.

Nikki McDowell, Centra Brand Manager, said: “Ulster Rugby’s Summer Camps has been a great initiative for Centra and its independent retail partners to be involved with over the past eight years. It is incredible to think, along with Ulster Rugby, we have supported the skills development of almost 10,000 young people throughout the Province. The interaction from the Ulster Rugby players who visit each week really makes the camps special and with additional camps available even more young players can make the most of a week of rugby during their summer holidays.”

The cost of the camps is £55 for a place on the Junior Camp, £35 for the Girls and Special Needs Camps and £85 for the Senior Camps. Discounts can be arranged whereby the same participant can attend a second camp and gain a £10 discount. The prices include a T-shirt, a boot bag, a rugby ball and a promotional code to claim a free ticket to an Ulster game at Kingspan Stadium.

Application forms are being distributed to schools and rugby clubs across Ulster and are also available from local Centra stores. Parents can also book and pay for camps online. Full details of this year’s Summer Camps and how to book can be found on www.ulsterrugby.com/domestic.

The 2015 Centra Ulster Rugby Summer Camps schedule is as follows: