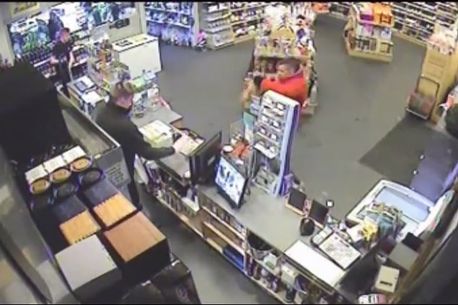 DETECTIVES are trying to identify a man who slipped and fell during an armed shop robbery n south Belfast.

Police have released CCTV footage of an armed robbery at an off-licence in February.

The CCTV footage captures the man entering the premises on Ormeau Road, shortly after 9.15pm on Sunday, February 15.

Detective Constable Tracey Blair said: “It was raining heavily outside and when the male entered the shop he slipped and fell on the floor with a female customer causing his hat and sunglasses to fall off thus allowing a clear unobstructed view of his face.

“He threatened staff and demanded money before making off with a sum of cash from the tills.”

The suspect is described as around 6ft in height, slim with short dark hair.

He was wearing a red ‘fleece’ jacket with white writing across the centre, a pair of dark blue jeans, black and white shoes, a sheepskin coloured hat with long ear warmers and a pair of brown rimmed sunglasses.

DC Blair added: “I would appeal any member of public who was present in the off-licence at the time of the robbery to contact police as they may be able to assist with the investigation.

“I would also ask people to look at this footage carefully to see if they can identify the suspect and to contact CID Musgrave on the non-emergency number 101 or anonymously through the independent charity Crimestoppers on 0800 555 111.”