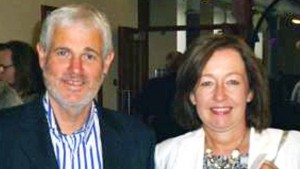 A Belfast couple on a mission to help the Nepal are safe and well.

They are among two missionary couples with the Presbyterian Church in Ireland, which works in partnership with United Mission to Nepal (UMN) who cheated injury in the earthquake which has claimed the lives of 4,000 people.

Stephen and Laura Coulter from Kirkpatrick Memorial Presbyterian Church in east Belfast are confirmed to be safe and well.

Peter and Valerie Lockwood from First Bangor Presbyterian Church were with their three children at an annual expatriate retreat in Pokhara, to the east of Kathmandu, and travelled back to the Nepali capital on Sunday.

“The situation in Kathmandu is under control but there is still widespread fear that another massive earthquake will strike,” said Peter.

“The majority of people are sleeping outside under makeshift tents and tarpaulin but the community spirit is good and people are looking out for each other. Outside of Kathmandu in the rural areas the situation is sketchy and information is slowly filtering in.

“A state of emergency has been declared in 35 out of the 75 districts in Nepal.”