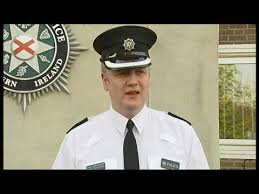 ANTI-TERROR cops believe a bomb attack on police vehicles in north Belfast was the work of dissident republicans.

Belfast policing boss Chief Supt Nigel Grimshaw said the device “detonated in the air” during the attack at Victoria Parade in the New Lodge on Tuesday night.

There are no reports of any injuries and the police vehicle was not damaged.

However, the top cop said a parked car had its windscreen smashed and shrapnel sprayed inside it.

“Had somebody been sitting in that car they would have been either killed or seriously injured,” he said.

“I’m really grateful this morning that neither my officers or any members of the community have been hurt.

“We know that these types of incidents are carried out by a small but mindless number of people within our communities. They have shown a callous disregard for the safety of the local community and the police officers who serve it.”

Families living nearby were moved from their homes overnight as a security operation got under way.

They were offered shelter in a local community centre.

The police patrol was investigating reports of an attempted burglary when the attack was carried out.

Army bomb officers and police were called to the scene. Houses at Duncairn Parade were evacuated.

Some people have now been allowed to return to their homes.

However, a police cordon remains in place at the scene while forensic experts comb the area for clues.