DUP: WE COULD BE KINGMAKERS IN NEXT UK GOVERNMENT 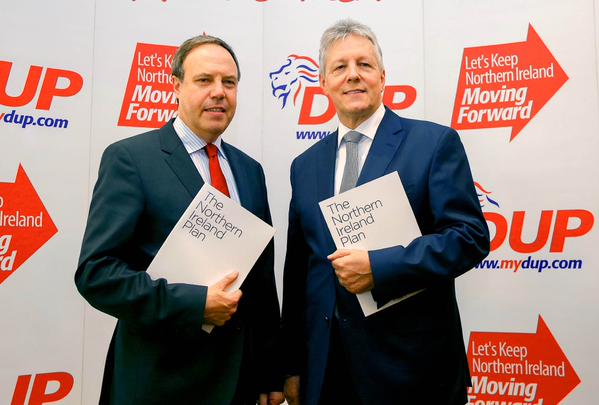 THE DUP has said it could play a pivotal role in shaping the next UK government.

It could win eight to 10 seats and has warned against cuts to front line services or rushing to eliminate the budget deficit.

Ruling out a formal coalition, the party said it was open to a deal with Labour or the Conservatives, claiming the difference between them on Northern Ireland spending plans was only £1 million.

Real increases in health and education spending over the next five years and abolition of the so-called bedroom tax on benefits recipients and air passenger duty were among concessions sought from Westminster outlined at the manifesto launch in Antrim on Tuesday.

DUP deputy leader Nigel Dodds said: “Everyone in this room and far beyond will know just how pivotal a role we may have after this election.

“With the polls as they have been for months and the SNP having marginalised their influence it is very likely that DUP MPs will have a crucial role in the next Parliament.

“There is a real opportunity to get what we need to make life better for Northern Ireland’s hard working people.”

It outlined plans to make Northern Ireland an “economic powerhouse”, including the devolution from London to Belfast of the power to reduce corporation tax to attract more foreign direct investment.

“The price for DUP support in the new parliament cannot simply be summarised and dismissed as more money for Northern Ireland.

“I believe that delivery of the Northern Ireland Plan can help redefine our place within the United Kingdom.

“So whilst we could well play a pivotal role in the next Parliament we have a sense of perspective about our size and our capacity to dictate policy at a national level.

“While our influence in the national context will be limited by our size and the wider post-election arithmetic we would contend that whatever the final Commons headcount we could be in a key position to bring real and substantial change to Northern Ireland.”

The DUP today launched its manifesto at the factory of one of Northern Ireland’s most successful companies, Wrightbus, which has exported its distinctive double deckers around the world including London.

Seeking real increases in health and education spending over the next five years and the protection of other key public services were among the DUP’s promises.

Mr Dodds said: “In our manifesto we make it clear we want to see the budget deficit eliminated.

“However, we also recognise that a rush to reduce and eliminate the deficit could have an impact on growth.

“After five years of sustained and deep cuts, the DUP believes that any further significant reductions to frontline services in areas that affect Barnett consequentials would be harmful.”

The Barnett formula is the mechanism of calculating how much money is transferred from London to Belfast to pay for public services.

The Conservatives have pledged to continue with UK cuts for the first two years of the next parliament if re-elected.

Mr Robinson said the difference between Labour and the Conservatives’ spending plans for Northern Ireland was only £1 million out of a £10 billion budget.

He said the DUP would not be part of the next Government but had the opportunity to make a real impact.

“This is a once in a life-time opportunity for Northern Ireland.”

Mr Dodds said: “We will assess any welfare proposals on the following tests: Will it incentivise work? What protection does it provide for those most in need? What impact will it have upon the costs of administration?

“Proposals such as taxing disability benefit will fail such tests. The DUP supports the triple lock on the state pension and will oppose plans to means test present universal benefits for pensioners.”