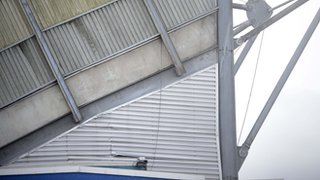 The cracked structure in the West Stand at Windsor Park

THE Irish Football Association has announced that the West Stand at Windsor Park is to be demolished.

However, the good news for fans is that the Northern Ireland game against Romnia will go ahead.

IFA chief executive Patrick Nelson said today that temporary seating will be put in place at the Spion Kop for the crunch June 13 qualifier.

He told the Department Culture, Arts and Leisure (DCAL Committee that the stand will be demolished within eight weeks and the temporary seating put in place for the Romania game.

A preliminary structural report with the Northern Ireland football governing body recommended the stand be demolished for safety reasons.

Windsor Park has been closed since cracks were discovered in the stand following last month’s Euro 2016 qualifier against Finland.

The venue has been scheduled to host the qualifier against Romania on 13 June.

The IFA held an emergency meeting last week to update members on the latest situation regarding the stadium.

It is believed that at least two independent reports are being carried out on the damaged stand, with cracks first spotted on 31 March, two days after Northern Ireland’s qualifier against Finland.

Linfield are unable to use their home venue and the Irish Cup final on 2 May, which was scheduled to be played at Windsor Park, has been moved to the Oval.