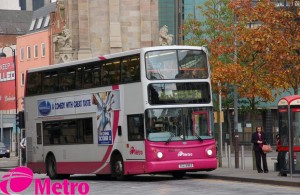 BUS drivers are to take part in a second strike that will affect all bus and rail services in Northern Ireland.

Trade union Unite said the 24-hour strike was being planned for Wednesday 6 May.

He said: “The proposed cuts will impact the most vulnerable people in our society – including the old and infirm, those with families, the working poor, those living in isolated, rural communities who are dependent on public transport.

“These cuts will compromise the integrity and inter-connectivity upon which Northern Ireland’s public transport system rests.

“Our drivers and engineers are concerned that cuts to ‘non-economic’ services presage moves to break up and contract out profitable routes – a move that would undermine the 85% of routes that are non-profitable.”

Unite added that it will be working with other trade unions that represent Translink staff to take forward the industrial action.