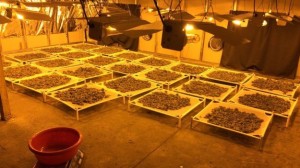 A 24-year-old woman is to face a court this morning charged over a police investigation into an international Chinese drugs trafficking operation.

She is charged with a number of drug offences relating to the ‘skunk’ cannabis haul.

Police said the woman was arrested in Birmingham on Wednesday. She is due to appear at Newtownards Magistrates’ Court on Saturday.

The woman is one of a number of people who have been charged in connection with the police investigation.

The officer leading the investigation, Det Insp Andy Dunlop, said: “There are more arrests to follow.

“This investigation is complex, but we are vigorously pursuing all lines of inquiry to gather all evidence against those allegedly involved. This is the ninth person to be charged in connection with this investigation.”

Police have carried out searches at more than 20 addresses since 25 March.

The PSNI is working with the National Crime Agency and Italian Carabinieri as part of the operation.