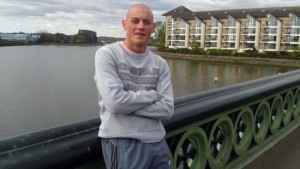 HUNDREDS of people have attended the funeral this morning in North Belfast of young dad Kyle Neil who was stabbed to death last weekend.

The service took place at 9 am at his grandmother’s home.

The 23-year-old sustained repeated and fatal stab wounds following a party and barbecue in Comber, Co Down, last Saturday night.

His body was found in the boot of a car in Belfast hours later.

His girlfriend Stephanie Todd was charged with assisting and offender.