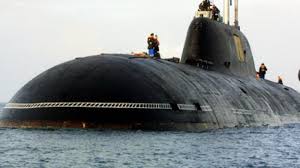 FISHERMEN and defence experts believe a Russian submarine may have dragged a trawler violently backwards after snagging in its nets.

Defence analysts believe the Russian sub has been tracking a British Vanguard submarine from Scotland’s Faslane trident nuclear base over recent months.

The Karen was towed at 10 knots during the incident 18 miles from Ardglass on the south east coast of Northern Ireland. The vessel was badly damaged but the crew escaped unharmed.

A Ministry of Defence (MoD) spokesman said he could not comment on Royal Navy submarine movements.

But Dick James, chief executive of the Northern Ireland Fish Producers’ Organisation, said Navy procedures meant its staff were supposed to stop and identify themselves following such an incident.

He said: “It is possible that it was a Russian submarine.

“You cannot always prevent it but if an incident like this did happen the (Royal Navy) protocols said that the submarine would immediately surface to check on the health and welfare of the people involved and this one did not.

“Paul Murphy, the skipper, said that he sat for five to 10 minutes catching his breath to see if the submarine would surface.

“It was a submarine, it had to be, it could not have been anything else.”

This week RAF Typhoons were launched to intercept two Russian aircraft near UK airspace, the MoD has confirmed.

The incident came as Britain hosted a Nato exercise in northern Scotland involving more than 50 warships.

The MoD said the Typhoons, from RAF Lossiemouth, were deployed “after Russian aircraft were identified flying close to UK airspace”.

Mr James added: “There has been Russian activity. There have been Allied exercises going on, the Russians have been taking an interest in it.”

The Coastguard has said the Karen reported a collision at a point known as the Calf of Man not far from the Isle of Man.

The skipper said the boat had been snagged and dragged backwards at speed.

Mr James added: “You don’t need to go long at that until you go under.”

The crew released wires connecting the net to the trawler and the boat steadied itself. It was able to make its way back to Ardglass.

Part of the deck had to be lifted because it was so badly damaged. Another section of the vessel was ripped off.

Mr James said: “It is a bloody mess.”

He added he was glad the four crew and everyone else was safe.

“The question mark now is what kind of a submarine was it?

“If it was Allied it should have been following an agreed protocol where this should not have happened.

“Our defence forces are not up to much if a rogue submarine of unidentified nationality is tearing around the Irish Sea.”

Tensions over the Ukraine conflict have soured relations between the West and Russia, which is suffering from US and EU sanctions imposed because the Kremlin is backing separatists in Eastern Ukraine.

Last month a trawler captain claimed his boat was nearly dragged to a watery grave by a Russian submarine while fishing off the Scottish coast.

Ardglass is one of Northern Ireland’s main fishing ports and local trawlermen are usually more concerned about fishing quotas than Cold War-style intrigue.

Sinn Fein Northern Ireland Assembly member Chris Hazzard said the community was angry the alleged submarine did not surface to check on the welfare of the mariners.

“The fact that this submarine didn’t even surface to make sure the fishermen were safe has caused considerable resentment in the area. It is totally unacceptable that a submarine would show such contempt for maritime workers.

“The skipper and his crew on the Karen, and indeed all of the local fleet deserve to know the truth about what happened. Whether this is a British vessel attached to the hugely controversial Trident system or a Nato submarine in training – our local fishermen deserve justice.”