PUPILS TO CREATE IRISH OPEN HISTORY FOR THEIR SCHOOL 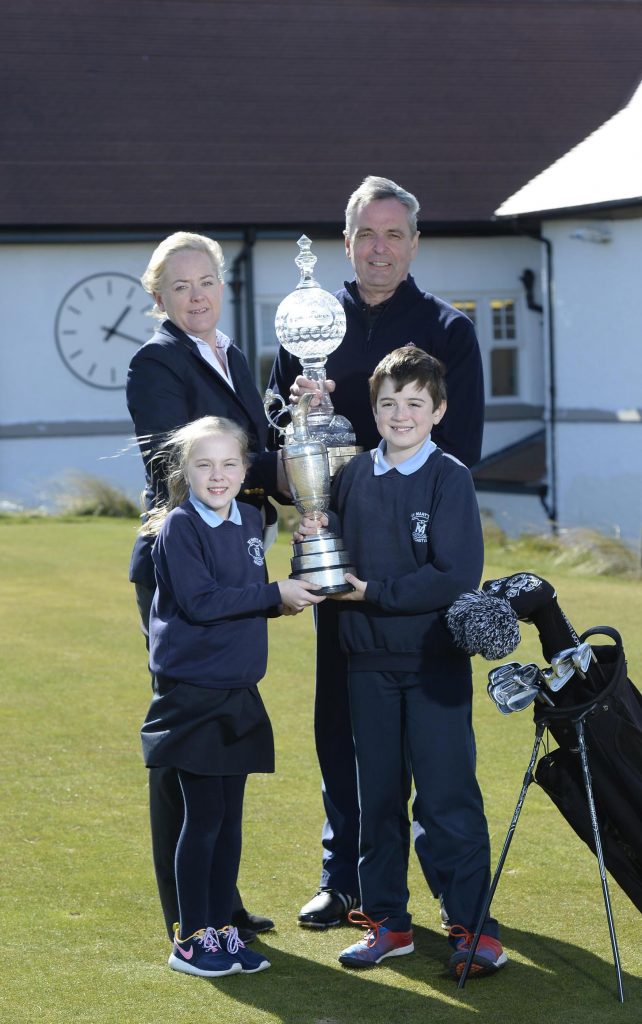 PRIZE PUPILS: Katie Curran and Daniel Jennings from St MaryÕs Primary School in Newcastle joined Antonia Beggs from The European Tour and Kevan Whitson, Head Golf Professional at Royal County Down, to launch the first ever Irish Open Trophy Tour competition which will give four lucky schools across the island of Ireland an historic opportunity to host a visit not only from the Dubai Duty Free Irish Open Trophy BUT ALSO the world famous ÔClaret JugÕ,

SCHOOLCHILDREN throughout Ireland are being invited to create Irish Open history for their school as part of a nationwide competition organised by The European Tour and the Rory Foundation.

For the first time ever, the inaugural Irish Open Trophy Tour competition will give four lucky schools across the island of Ireland an historic opportunity to host a visit not only from the Irish Open Trophy BUT ALSO the world famous ‘Claret Jug’, which, as reigning Open Champion, currently resides in the bulging trophy cabinet of none other than world number one Rory McIlroy.

Supported by the Confederation of Golf in Ireland (CGI), the competition invites children between the ages of 9 and 15 to tell The European Tour why their class or school deserves a visit from these two prestigious trophies.

Not only that, the four winning schools will also participate in a Q&A session with representatives of The European Tour, Rory Foundation and Royal County Down Golf Club – as well as taking part in a CGI ‘Golf Awareness Clinic’ which will give children a fun introduction to the sport through a variety of golf-related games including putting games and hitting real golf balls into a blow up net, and virtual golf on the Wii console.

Pupils will also gain an insight into the life of a professional golfer from Irish professional golfer and Dubai Duty Free golf ambassador Des Smyth, eight-time winner on the European Tour, vice-captain of Europe’s victorious 2006 and 2014 Ryder Cup teams, and twice a member of the Ryder Cup playing team in 1979 and 1981.

Drogheda-born Des is also in the record books as one of the oldest winners in European Tour history, when he won the 2001 Madeira Island Open aged 48 years and 34 days, and one of just two players (alongside Mark McNulty) to win a European Tour event in each of the first four decades of the European Tour.

The four winning schools will also receive tickets for the winners’ class to go to the Pro Am event on the Wednesday while the overall winning pupil will receive family tickets for the Pro Am and a VIP tour with a chance to meet some of the world’s top golfers.

To enter, schoolchildren should simply send an email to trophytour@irishopen.ie outlining in no more than 250 words why their class or school deserves to win this unique and historic prize – clearly stating their name, age, address and school.

Closing date for entries is Thursday April 30th with the prize to be taken between May 4th and 15th.

“Professional sport can really inspire individuals and a trophy is the ultimate aim for many in sport,” said The European Tour’s Dubai Duty Free Irish Open Championship Director Antonia Beggs, “which is why we’ve decided to give schools in Ireland a chance to host the prestigious Irish Open trophy which has been held aloft by so many golfing legends over the years.

“Not only that, our winning schools will also get to see and have their picture taken with the world famous ‘Claret Jug’ which has been kindly donated by the current Open Champion Rory McIlroy.  As the best golfer in the world at the moment, Rory is a perfect example of how top professional golfers can inspire anyone to be as good as they can in whatever they choose to be.  This is a very strong message that we want to convey to children with our first ever Irish Open Trophy Tour Competition.

“Follow your dreams, work hard and you can achieve great things!” she added.

Brian McIlroy of the Rory Foundation said:  “Rory is very proud of where he comes from and it is very important for him to be as good an ambassador as he can for the island of Ireland, north and south.  In addition, his commitment to helping children all over the world through the Rory Foundation is as strong and driven as it is to his golf.

“Now, through the Irish Open Trophy Tour, we want to engage with schoolchildren throughout Northern Ireland and the Republic of Ireland to stimulate pride in their class, school, area in which they live, and their own achievements – while at the same time encouraging a love of sport, and in particular golf.

“We really want to hear their stories and what makes themselves, their school or their region so special,” he added.

More than 80,000 spectators are expected and tens of thousands of tickets have already been sold for this year’s Dubai Duty Free Irish Open hosted by the Rory Foundation, which is supported by Tourism Northern Ireland.

The event is one of the most eagerly anticipated Irish Opens ever with many of the world’s best golfers already confirmed to play including Rickie Fowler, Sergio Garcia, Padraig Harrington, Graeme McDowell, Lee Westwood, Ernies Els, Ryder Cup Captain Darren Clarke and, of course, Rory McIroy himself.

Advance tickets are currently available at a cost of £30 or £35 per day with season tickets (for all four days) available for £75.  Families will be delighted to hear that under-16s will be admitted FREE as long as they are accompanied by an adult (up to four children are allowed with one paying adult).

For more information on the 2015 Dubai Duty Free Irish Open hosted by the Rory Foundation or to purchase tickets, visitwww.irishopen.ie.