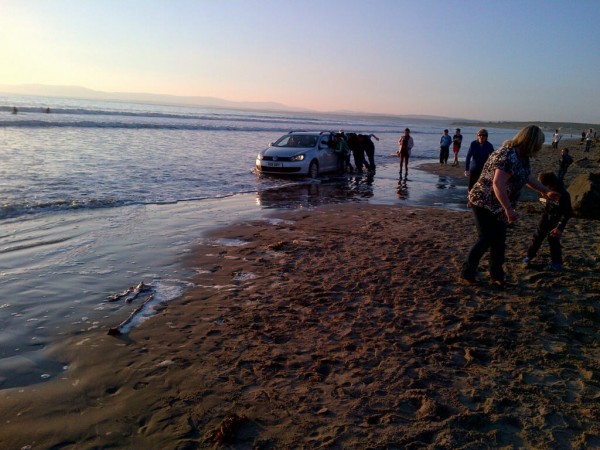 A motorist had a lucky escape after their vehicle was almost swept out to sea after getting stuck on the popular Rossnowlagh beach yesterday morning.

The motorist from Northern Ireland was caught out by the volatile tides on Rossnowlagh which is has now become a notorious hazard for drivers who park on the beach.

Over the last number of years other drivers have been left stuck on the beach and locals have appealed for visitors to stop parking on the beach to alleviate the on-going issue.

However, the tide coming in quickly wasn’t the issue today unlike in previous years.

The engine of the VW car cut out and the motorist couldn’t get it started.

As the tide moved in the motorist was helped by locals who battled tirelessly to get the car off the strand.

Eventually the community effort ensured the vehicle got off the beach before it was swallowed by the waves.

At one stage the Sligo 118 Rescue chopper swooped overhead as the rescue operation took place.

Thankfully the car was removed in time and a relieved motorist admitted they’ll think twice about parking on a beach from now on.