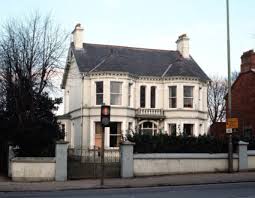 A Kincora abuse victim has told Channel 4 News how he was also abused at London’s Elm Guest House and Dolphin Square at the hands of “very powerful people”.

Richard Kerr’s harrowing account of what happened to him as a boy links three of the most important alleged VIP paedophile ring locations for the first time.

They are – Dolphin Square, a luxury complex, popular with MPs and civil servants; Kincora Boy’s Home in Belfast, where boys were systematically abused; and Elm Guest House, a former gay brothel where young children are also said to have been molested.

Last month Channel 4 News brought Mr Kerr to England from America, with his counsellor, to revisit his past.

On being back in London for the first time, he tells reporter Cordelia Lynch he feels “very emotional, very painful. I’m scared.”

He was introduced to the world of Westminster as a teenager and has suffered for nearly 30 years in silence. His memories are vivid and distressing.

In an interview with Channel 4 News to be broadcast on Tuesday 7th April 2015 at 7pm, Kerr insists a VIP paedophile ring did exist.

Kerr was abused at the notorious Kincora boys’ home in Belfast in the 1970s. There he claims he and two other boys were hand-picked to be trafficked to London in 1977 and sexually abused by men.

Both of them he says have since taken their own lives.

At Elm Guest House in South London, Kerr describes to Channel 4 News how he faced his most violent experience.

The guest house was raided by police in 1982 and it was reported officers found whips, chains and ropes.

Standing outside Elm Guest House, a visibly distraught Kerr tells Channel 4 News: “I don’t mean to be this way. It happened. I just don’t mean to be. It’s just holding on this sometimes. I can’t believe this happened. God help me.”

Kerr claims he was also taken by taxi to Dolphin Square in the heart of Westminster. It is now at the nexus of the Met Police’s Operation Midland which is also looking into alleged murders.

Kerr: “I could have been 16, 15, 17 … I remember going in with this guy. He told me to sit down and relax and explained about his glasses. He had Waterford Crystal and he wanted me to have a brandy and we had a small one. And then we had a sexual encounter in here.”

“I’m still in some fear,” he says. “Even though I’m willing to take the courage.”

“I need to know that I can have faith in our government but right now, when they’re not willing to bring Kincora into Westminster, the message that sends to me, is that there’s some kind of cover-up and there has been.”