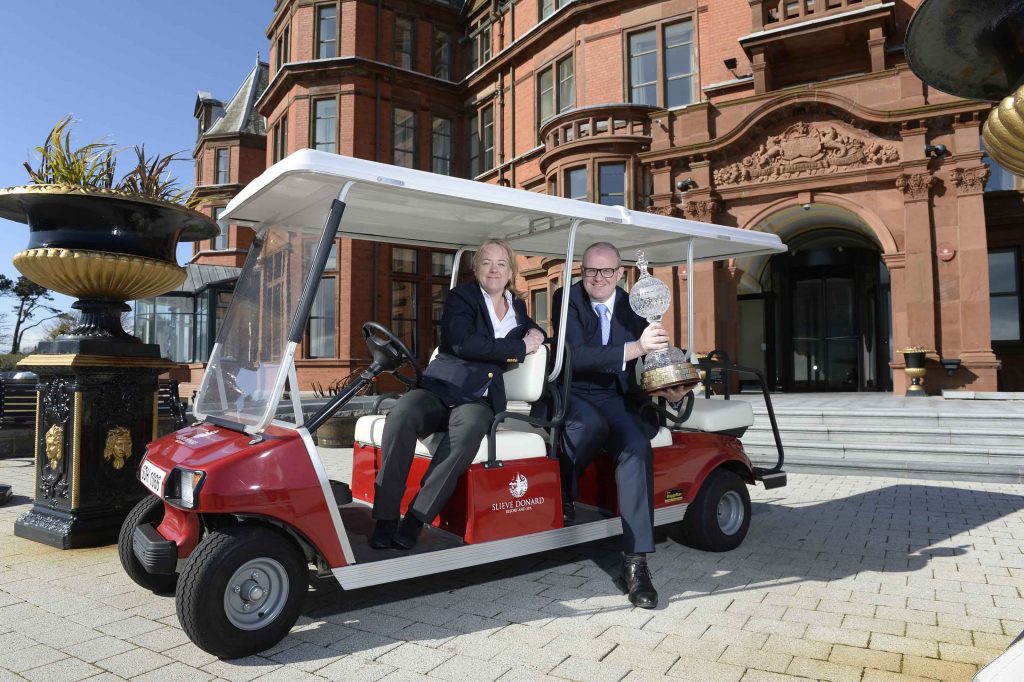 OPEN FOR BUSINESS: The European Tour’s Antonia Beggs and Stephen Meldrum, General Manager of the Slieve Donard Resort & Spa, Newcastle celebrate the announcement that the hotel has been named as the Official Host Hotel for the 2015 Dubai Duty Free Irish Open hosted by The Rory Foundation.

THE Slieve Donard Resort & Spa in Newcastle, County Down, has been named as the Official Host Hotel for the 2015 Dubai Duty Free Irish Open hosted by The Rory Foundation.

The popular hotel, set against the stunning backdrop of the Mourne Mountains, will welcome world renowned golfers such as Rory McIlroy, Graeme McDowell, Darren Clarke, Ernie Els, Rickie Fowler, Padraig Harrington and Sergio Garcia all of whom will be competing in the eagerly anticipated event at neighbouring Royal County Down, widely regarded as one of the best golf courses in the world.

“We are absolutely thrilled to be the host hotel for this year’s Dubai Duty Free Irish Open as it really is a once in a lifetime opportunity,” said Stephen Meldrum, General Manager of the Slieve Donard Resort & Spa.

“We really are delighted to be associated with the event and excited that, come the end of May, the eyes of the world will be focussing on the beautiful sea side town of Newcastle.

“As well as welcoming golfers, the hotel will also play host to dignitaries, officials and sponsors from around the world and we have no doubt that the atmosphere at the hotel as well as around Newcastle will be absolutely electric.

“For spectators, there will be nothing better after a nail biting day on the greens than to come to the Slieve Donard to relax, unwind and enjoy some delicious food as well as a warm welcome from the locals. Visitors can relax in the sumptuous surroundings and enjoy a delicious lunch or dinner at the Oak restaurant or Percy French Inn which is also open for breakfast throughout the tournament,” concluded Stephen.

Tens of thousands of tickets have already been purchased by enthusiastic golf fans, as revealed by tournament organiser The European Tour, and many of them have chosen to stay at the spectacular Slieve Donard Resort & Spa which boasts 181 luxurious bedrooms, many of which offer picture postcard views across gardens, coastline or the famous Mourne Mountains.

“We are thrilled to announce that the Slieve Donard Resort & Spa is the Official Host Hotel for the Dubai Duty Free Irish Open 2015.  The players will be delighted that after an exhilarating day out on the links they can come back to the luxurious surroundings of this beautiful hotel.

“It’s clear to see why the hotel is so popular with locals and tourists alike with the stunning Mourne Mountains as a backdrop, delicious food and the wonderful warm welcome from staff ,” she added.

To celebrate the Slieve Donard’s newfound status as Official Host Hotel, the hotel has launched a special offer ‘The Golfers Dream’ which offers visitors a chance to enjoy accommodation in a classic room for two nights including full Irish Breakfast on both mornings as well as dinner in the Oak restaurant and use of the spa facilities.

For anyone who would like to watch Rory McIlroy and a host of world class golfers’ in action, tickets for the Dubai Duty Free Irish Open hosted by the Rory Foundation can be purchased at www.irishopen.ie. Tickets cost between £30 and £35 per day and kids under the age of 16 will be admitted FREE as long as they are accompanied by an adult (up to four children are allowed with one paying adult).

Corporate hospitality packages are also available for the event at a cost of £300 + VAT per person.  Already sold out onFriday May 29, these exclusive tickets include course admission with reserved grandstand seat on the 18th green, an official programme, reserved VIP parking (for one or two people), and generous hospitality in the Grand Ballroom in the neighbouring Slieve Donard Hotel – including breakfast followed by a Champagne Reception, a buffet lunch served with fine wines, afternoon tea and a complimentary bar.