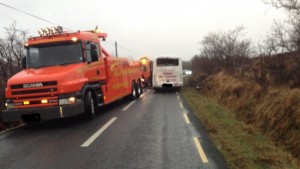 The scene of the bus crash yesterday in Co Donegal

A number of children from Northern Ireland were taken to hospital following a bus crash in Co Donegal yesterday.

The bus was carrying the Carrickfergus Rugby Club’s Under-14 team and their coaches.

It is understood the bus overturned on the Laghey to Pettigo Road just before 3pm this afternoon.

The team had travelled to Donegal town to play a league match earlier yesterday morning.

A spokesman for the club said nine people on the all boys team were treated in Enniskillen Hospital.

The coach, a schoolteacher, 40, broke his ankle and was transferred for treatment to Altnagelvin Hospital in Derry.

Fire crews said the bus turned over onto its side in a ditch before they returned it to its four wheels.