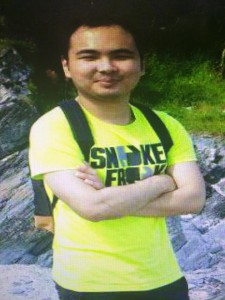 As a result, detectives have issued of the last know movements of Mr Shi captured on CCTV footage.

“The CCTV footage that we are issuing today is from earlier that morning when Feng was seen at the Royal Victoria Hospital.  These are the clearest images we have of him.

“He is of medium build with dark coloured, receding hair.  When last seen he was wearing a dark coat with a hood, blue jeans, red trainers and a red and blue baseball cap.  He was also carrying a duffle bag over his shoulder.

“We have a dedicated team of detectives who have been working on this case and have been able to determine Feng’s movements up until 07.01am on 4th March.  However, we need the public to help us locate him.

“We have been in contact with Feng’s family in China and they have told us he was in regular contact with his mother and it is totally out of character for him not to make contact with them.

“We have produced a missing person poster of Feng which has been distributed by the Chinese Consulate and the Chinese Welfare Association.  We have also distributed the leaflet throughout Belfast, Killyleagh, Downpatrick and Newry as we believe Feng may have friends in these areas.

“I am extremely concerned for his safety and welfare and would encourage anyone who remembers seeing him to get in touch with police on the non-emergency number 101.”