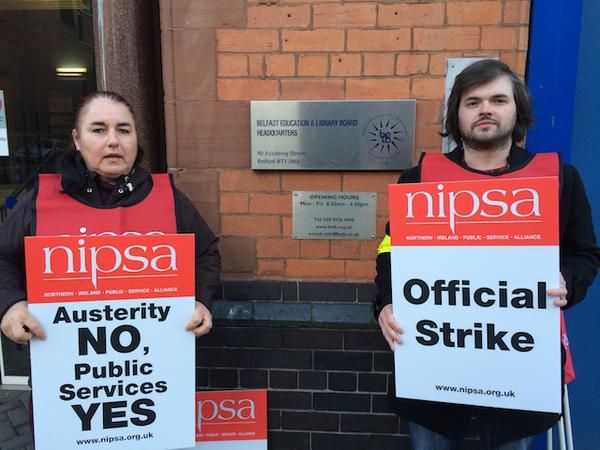 THE Ambulance Service declared a “major incident” minutes before staff were due to start a one-day strike last night.

It meant staff had to call off their 24-hour strike over pay and job cuts.

A massive rally is expected at lunchtime today at Belfast City Hall.

But when NI Ambulance Service management declared a major incident at 23.40 pm on Thursday night, it meant crews had pull back from striking,

Management said they were forced to take the measure “to maintain a safe level of ambulance cover”.

However, unions have reacted angrily with Unite accusing management of “pulling a stunt”.

In a text to staff, the Ambulance Service said: “Please be advised that a major incident has been declared due to critical levels of cover and in line with the guidance issued by your union you are expected to report for duty as normal.”

The Ambulance Service said it was “inundated” with calls saying staff would be striking.

In a statement to the media, it said it had “exhausted all alternative contingency options, and lives would be at risk if we allowed the situation to deteriorate further”.

In a tweet, the Ambulance Service added: “Two cities and many towns without ambulance cover is the only reason NIAS declared major incident.”

Ambulance Service spokesman John McPoland said at midnight there were seven crews available for all emergencies across Northern Ireland.

“If we hadn’t have declared a major incident because the level of services had decreased so much, we would be left with a situation this morning, where rather than having to explain a major incident, I could have been in here trying to explain to some family why a child who was choking in Newtownabbey, a three-month-old child, had perhaps died,” he said.

“Last night we had no crews to respond to any emergencies in Belfast”.

However, some paramedics described management’s response as “despicable” and a “purely tactical measure”.

Ambulance crews had earlier agreed to respond only to 999 calls for cases that are life-threatening.

Unison official Patricia McKeown said the decision to “declare a major incident across the whole of Northern Ireland two hours in advance of strike action is provocative”.

“There are no indications that such a major incident exists,” she said.

“Ambulance staff have the right to strike and we will support our members who chose to exercise their right. By declaring a major incident NIAS has effectively binned the agreements reached earlier.”

She said the Ambulance Service move could be “irreparably damaging industrial relations”.

“We advised our members to return to normal roles in response to the NIAS’s action in line with undertakings we had given,” he said.

“The trade unions know now the facts on the ground: that there was no major incident, rather there was an inability and unwillingness for management to effectively manage the strike.

“We are unhappy and disgusted by the NIAS cynically exploiting this part of the emergency cover understanding to thwart the industrial action.”