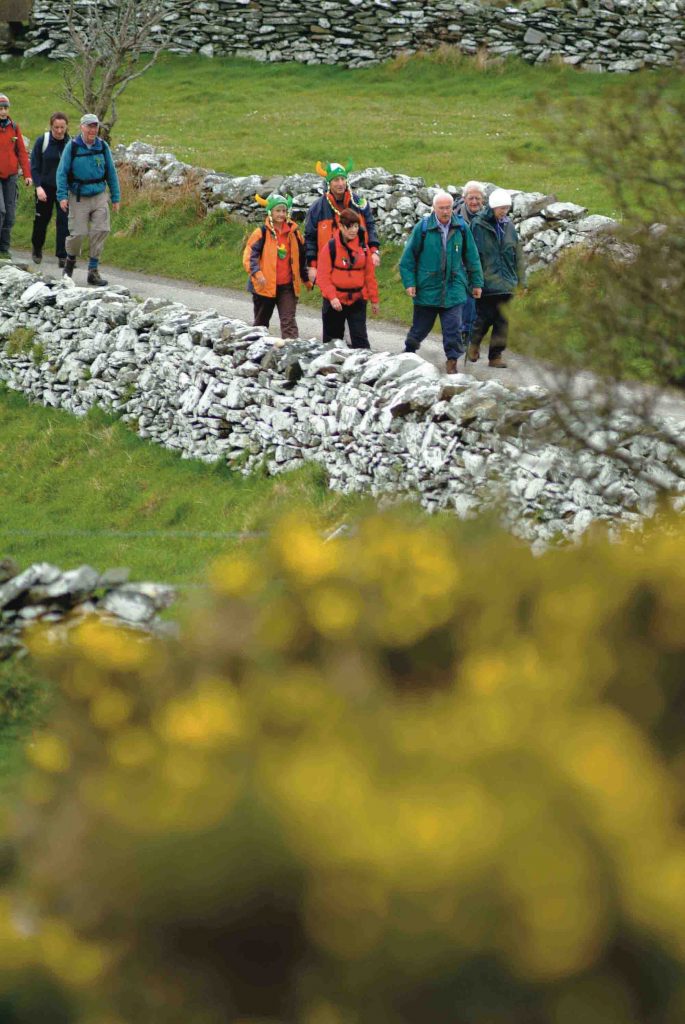 Join the annual walk through St PatrickÛªs country. Organised jointly by Down District Council and the Lecale Ramblers, the route includes a mixture of quiet country roads and green lanes. The event is free and a wee dram of whiskey (or tea/coffee) is provided at a secret location along the route!

St Patrick’s Day celebrations occur all over the globe but there is no better place to enjoy the fun than in Northern Ireland where you can take part in everything from street carnivals to open air concerts, storytelling to tea dances and cruises.

The history of St Patrick is fascinating with interesting myths and legends that include shamrocks, snakes, celtic crosses and blackbirds, for curious kids to learn about at fun events for the whole family.

Pauline Gormley, Destination PR Officer for the Tourism Northern Ireland (Tourism NI) is encouraging people to make the most of what is on offer and join in all the festivities.

“There is a great selection of St Patrick’s events taking place right across Northern Ireland and with the days getting a little longer it’s the ideal time for a family day out.   Make the fun last even longer by booking a short break at a great hotel or B&B and get into the festive sprit of the patron saint of Ireland’s day,” Pauline added.

Tourism NI has put together a guide to St Patrick’s Day festivals and events across Northern Ireland:

It wouldn’t be St Patrick’s Day without a parade so why not come along and enjoy the colourful carnival that will leave Belfast City Hall at 12 noon on March 17.  After the high energy parade you can enjoy the free concert at Custom House Square between 1pm and 3pm, hosted by Citybeat’s Stephen and Sara and featuring 2014 Britain’s Got Talent semi-finalists Innova, Highland dancers, Sollus and headline act Simon Webbe.

Put your dancing shoes on and enjoy an afternoon of old time dancing and refreshments whilst listening to the fantastic John Trotter band at the Punjana St Patrick’s Tea Dance in the Ulster Hall on March 17.

The Lyric Theatre will be hosting an evening with the McPeake family on March 16. The four generations of the McPeake Family are one of those rare Irish gems that have been described as ‘folk-royalty’ and they will no doubt delight lovers of traditional Irish music.

Blow the cobwebs away and follow in St Patrick’s footsteps and climb Slemish Mountain in Ballymena. The one and a half kilometre round walk to the summit takes approximately an hour and during the walk you can soak up the excellent views of Antrim and the Scottish coast as well as Ballymena town, Lough Neagh and the Sperrin Mountains.

A bus service will operate at Buckna, Broughshane from 9am to 3pm and at the Ecos Centre from 9am to 2pm. The price for adults is £2, £1.50 for children and under 5’s go free. If you are feeling worn out after your walk then you can enjoy some delicious Irish stew and light refreshments which will be on sale in Ecos Centre

Celebrate St Patrick in his chosen city of Armagh with its largest ever St Patrick’s Festival. The busy schedule of events is guaranteed to keep the 20,000 expected visitors entertained during this six day extravaganza.  The celebrations will take in 20 of the city’s best venues making it one of the largest St Patrick’s events to take place anywhere in Ireland which also includes a busking festival on March 14.

A four day musical Session Trail will also feature live entertainment with traditional music and family friendly sessions across Armagh’s bars, cafes and restaurants.  You can take the kids to Navan Fort where a life sized interactive storyboard will tell the story of the life of St Patrick and his decision to choose Armagh as the site of his first church.

Children will love to hear the tall tales, myths and songs from Ireland’s foremost storytelling and song duo Billy Teare and Kathleen O Sullivan at the Armagh Public Library on March 13. Watch the wonder on their faces as they sit back and hear the magic of ‘The Story Tellin’ Man and the Songstress’.

The Market Place Theatre be transformed into an official festival venue where visitors can enjoy great music, laugh out loud comedy and dance entertainment from acts such as Mary Coughlan, Stockton’s Wing, PJ Gallagher and Kila.

Find out more about St Patrick by visiting his main church which he founded on the Hill of Armagh in 445AD. St Patrick’s Cathedral has been renovated many times since, however the basic shape of the Cathedral remains the same and visitors can admire its interesting monuments and 11th century carved stone high cross.

For a real celebration of all things St Patrick it has to be Co Down and the place to be is Downpatrick.

A whole host of exciting events and experiences will be available at the Saint Patrick’s Festival in Downpatrick fromMarch 11 to March 17 this year. From a Festival Road Show, Artisan Food Market, Cross Community Carnival Parade and Street Music Competition, there really is something for everyone.

On St Patrick’s day itself, enjoy a whole host of entertainment including balloon modelling, circus performers, storytelling, face painting and even a re-enactment of St Patrick’s landing at Slaney.

The centre-piece of Down’s Saint Patrick’s Day celebrations is a lively parade which attracts thousands of revellers all eager to soak up the electric atmosphere.  This year’s theme is, Myths, Magic, Music: A Celebration and features a spectacular cavalcade of floats, bands, fancy dress and lots of attractions.  The parade departs Ardglass Road, Downpatrick at 2.30pm on March 17 for the city centre.

An unmissable Open Air Concert on March 17 features, amongst others, some of Ireland’s best traditional musicians including band, Four Men and a Dog,  who are well known for playing Irish traditional music with a mixture of other genres, including jazz and even rap, making their concerts truly memorable.

Take the Shamrock Steam Train from Inch Abbey Station to Downpatrick town centre and get right to the centre of the fun or hop on after the festival and visit the 12th Century ruins connected with St Patrick.  The steam train runs from12pm to 5pm – for admission and other details visit www.downrail.co.uk.

Take your children along to the Reptile Display on March 13 at The Saint Patrick Centre where admission is completely free and they can learn all about snakes and their association with Ireland’s Patron Saint.

On March 15 at Downpatrick Cathedral, John Anderson and the Voices of Ireland will be giving a recital in honour of St Patrick.  Music lovers will enjoy the array of sacred and secular music ranging from popular songs of today to well known Irish melodies.

Go along to the Down County Museum where you can listen to the museum curator Mike King give a lecture on St Patrick’s Cross: Rediscovery and Reconstruction on March 16 as presented by The Lecale and Downe Historical Society.

Alternatively learn more about St Patrick at Down Cathedral where his remains are said to be buried. Here you can also admire the magnificent stained glass windows, box pews and beautiful organ case.  At the Saint Patrick Centre in Downpatrick you can learn more about the patron Saint of Ireland as the centre is the only exhibition in the world solely dedicated to him.

For a truly interesting family day out, discover the history of St Patrick along the 92 mile St Patrick Trail through Armagh and Down. The trail kicks off at St Patricks Church of Ireland Cathedral, Armagh and finishes at the North Down Museum in Bangor. The trail allows you to explore the heritage of St Patrick in lots of different places including Newry, Newtownards, Craigavon and Dromore.

A real hidden gem is Struell Wells in Downpatrick which was built around a stream flowing through a secluded valley. This was a popular place of pilgrimage from 1600s to 1840s as St Patrick was believed to have bathed in the wells waters.

For a fun filled day out with the family go along to Springhill, Moneymore on March 15 for some Shamrock Shenanigans. The Armagh Rhymers will perform unique music throughout the afternoon so you can sit back and enjoy the traditional music. Visitors can learn about the bygone art of traditional bread making and children can take part in the shamrock crafts. Normal admission applies and best of all, anyone called ‘Patrick’ goes free! Children will be also delighted to take part in the Shamrock Trail where they can follow the Springhill leprechauns, Barney and Biddy as they make their way around Springhill Estate.

The city of Derry will celebrate St Patrick’s weekend with a three day entertainment extravaganza including the spectacular annual St Patrick’s Day Carnival Parade. The theme of the celebration is ‘A Kaleidoscope of Culture’ which reflects the diverse and ever changing wonders of life in the city.

A huge array of events will take place all over the city on March 17 including a National Trust Leprechaun Hunt, Senior Citizens Luncheon at the Caw Centre, Mayor’s Family Fun day in the Guildhall Square, and live music in venues such as the City Hotel and White Horse Hotel.

Why not relax on a St Patrick’s Day cruise on March 17 onboard the MV Kestrel and visit the famous Devenish Island Monastic Site which includes the Augustinian Abbey.  You can soak up the breathtaking scenery and panoramic views on this tour which lasts around 1 hour and 45 minutes and includes a live commentary from the crew. Adults cost £10, senior citizens £9, children under 12 are £6 and family tickets for two children and two adults are £28.

The streets of Omagh will be alive with music and laughter during their annual St Patrick’s Day festival which includes an open air concert on March 17 from 1pm to 4pm. There will be an amazing display of creative talent and revellers can listen to the very best of traditional and contemporary Irish and Ulster Scots music and dance. The popular ‘Goats Don’t Shave’ will be on hand to whip the crowd into a frenzy and get everyone singing and clapping along.

Strule Arts Centre in Omagh will also host an arts & craft fair on March 17 from 12pm to 5pm where you can come along to browse the wide variety of authentic Irish items including a mixture of ceramics, jewellery, knitwear, tapestry and more.

If you are interested in really delving into the history and culture of St Patrick’s Day then a day at the Ulster American Folk Park at the The Emigrants Farewell – St Patrick’s Celebrations, is for you. Countless thousands of people left Ireland in the 1700’s and 1800’s and the hours before departure became known as the Living Wake. Those with a keen interest in history will enjoy the dramatic re-enactment complete with music, song and dance.

To find out more about what is happening in Northern Ireland over St Patrick’s Day or for further information on places to stay or things to see and do click on www.discovernorthernireland.com/stpatrick or visit your local visitor information centre.