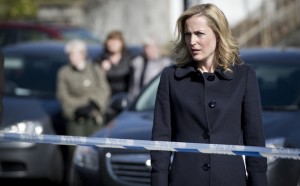 BBC NI chiefs have confirmed that the hit serial psycho killer drama The Fall will get a third series.

And it will all be filmed in Belfast.

It means Detective Supt Stella Gibson, played by Gillian Anderson, will get another, and possibly a final chance, to nail her prey – lady killer Paul Spector, played by Fifty Shades of Grey heartthrob Jamie Dornan.

The highly acclaimed drama has been created, written and directed by Allan Cubitt.

He said: “The cliff-hanger ending of season two was conceived in the hope of further exploring the characters and the themes that are at the heart of The Fall.

“We’re grateful to be given this opportunity by the BBC.”

BBC drama controller Ben Stephenson  said: “The story is far from over.

“Allan has known the end game from the beginning – the cat and mouse game between Gillian and Jamie has one last act to play out. Who will win?”